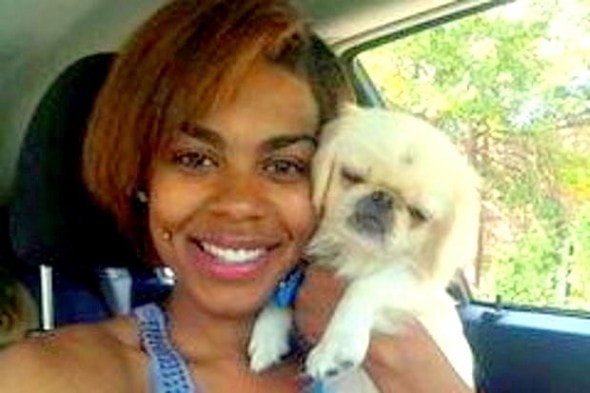 A Cleveland woman risked her own safety to save an injured little dog from a man who had him in a duffel bag and was intent on suffocating him.  After getting the pup out of harm’s way and nursing him back to health, she was able to adopt him.

Brittany Owens was working at a hot dog stand on September 19th when a highly agitated man approached her.  She could see two little ears poking out of the duffel bag he was carrying, and asked him what was inside.

“It’s a dog and I don’t like him I am going to kill this little dog by suffocating him,” the guy said.

The quick-thinking young woman asked him if she could have the dog or buy it off him.  But this just made the man angrier and he maintained his plan to kill the dog.

Owens abruptly grabbed the bag away from the man, who then tried to strike her.  She was able to defend herself and chase him away.

When she opened the bag, Owens could see the poor dog had a fresh head wound.  She flagged down an officer to tell him what happened before taking the dog to a veterinarian

Police were able to find the man, who had gone off his meds and was having a psychiatric episode.  He was taken in to be evaluated and have his medications monitored.

Owens nursed the unwanted dog back to health and adopted him.  Because of her heroic actions, she is being nominated for an award.

“Ms. Owens saw that dog was going to be harmed by an obviously distraught male and she quickly took action to protect the dog at great risk to her own safety,” the Cleveland Police Department reported.  “She rescued the dog, avoided being assaulted, then provided officers with an accurate description of the male. The male was, at the time, in a crisis. He was taken to be mentally evaluated and to have his medications monitored. Ms. Brittany Owens has been nominated to receive Citizens Pin for her heroic actions by Lieutenant Timothy Gaertner.”