Xochitl Dalton was taking her family to the Wet’n’Wild Splash Town water park near Houston, Texas, and when she pulled into the parking lot she, saw something that disturbed her.  She saw a dog, trapped in a hot car panting, and looking as if it was about to pass out.

“I looked over and saw that there was a huge yellow lab,” Dalton said to KPRC-TV in Houston.  “It looked like it was really, really hot.” 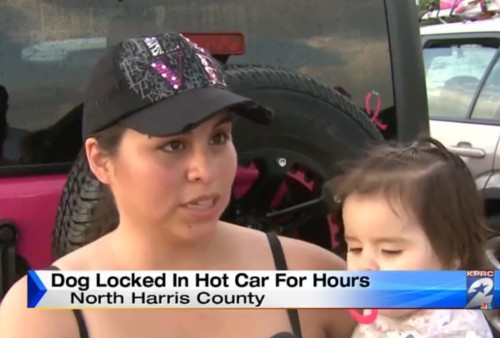 Temperatures in the area had hit 90 degrees that Friday, and investigators later said that the temperature inside the vehicle the lab was trapped in could have gotten as high as 140 degrees.  Deputies responding to the scene said the dog seemed as if it were on the verge of passing out.

Not only had Dalton summoned the police to the parking lot of the water park located in spring, Texas, which is about a half an hour north of Huston, but she did something else too.

“I posted a picture of the dog to several Facebook groups,” Dalton told KPRC.  “I was amazed at how many people were wanting to rescue this dog.”

There had been about a dozen people from all over the area that had rushed to the parking lot to try to help.

“I immediately dropped everything, got in my car and drove from Magnolia (Texas) up here, ready to bust the windshield out,” said Melissa Camp.  She had seen the Facebook post. 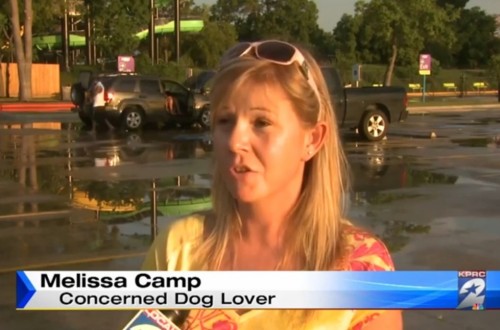 Dalton apparently chatted on Facebook with concerned friends after posting the photo of the dog.  She had posted that the officer that had showed up would not break the vehicle’s windows to rescue the dog.  On her Facebook page she posted: “He is trying to find the owner!”  And in another post, said “Really!?!”

There was quiet a group surrounding the vehicle and may of the people were more than ready to bust out a window and rescue the poor, overheated dog.  However, before anyone went that far, an employee of the facility they were at managed to squeeze his hand through a window that had been left rolled down just a crack.  He managed to unlock the door, and got the panting dog, that had clearly come very close to being overcome by the heat he had been exposed to for so long.

At closing time for the park Friday evening, KPRC reported that authorities had located the owner, and arrested him.  His name and information was not made public, but authorities did say that he’d been booked into jail on animal cruelty charges. 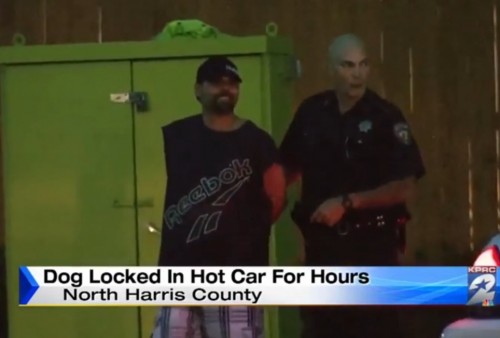 The dog has undergone a health evaluation and is in the custody of the Harris County Constable Precinct One Office.  Reports say he is doing just fine.  Hopefully, there will be more details to come.