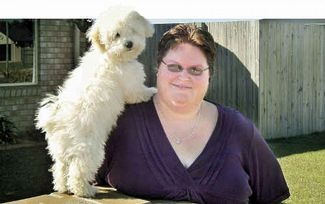 When her six-month-old puppy was diagnosed with patent ductus arteriosus (PDA), Australian Tanya Hoberg realized that she was in over her head. PDA is a common heart defect in small dogs, causing the heart to become enlarged, and the surgery required to repair it is expensive – roughly $4500.

Hoberg did not have the money to cover the procedure, but that didn’t discourage her: instead, it inspired her to make a big move on behalf of her new pet. She put her house on the market in order to raise the funds. While some may consider that extreme, or even foolish,  Hoberg said she did not think twice about sacrificing her share of the Australian dream.

“I just love her to bits,” she said. “She’s more important to me than anything else,” she said.

When her home failed to sell, she slashed thousands off the price hoping that the right buyer would come along. They eventually did, and a few months after learning of Pepsy’s condition, Hoberg had raised the money needed to cover the surgery.

Dr Brad Gavaghan operated on Pepsy at his Brisbane clinic, and just last Wednesday she was given the all-clear after an ultrasound confirmed that her heart had shrunk.

Now Hoberg is living in a rental property with with Pepsy and her two other dogs, and says she has no regrets about the sacrifice she made.  “Even if the outcome was not as we had hoped, I would still make the same decision for surgery,” she said. “People need to realize that a pet is for life, and not just a toy.”

17 thoughts on “Woman Sells Home to Save Her Dog”