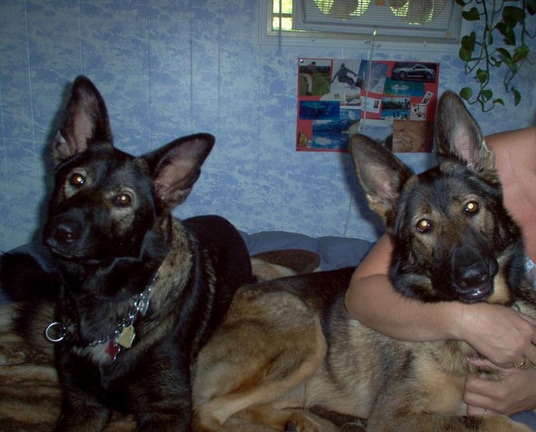 A New Hampshire woman has been sentenced to serve 4 to 8 years in state prison for her torture of two 8-year-old German Shepherds, Pebbles and Magic. 35-year-old Jamie Labbe forced several metal objects down the two dogs’ throats back in April 2011, an apparent act of revenge on her boyfriend, Kurt Krohn. The dogs were taken by Krohn to the veterinary clinic where emergency surgery had to be performed. Magic recovered, but Pebbles did not survive.

Judge Marguerite Wageling called the case the worst animal abuse case she has ever seen. Objects found in the dogs’ stomachs included a 6-inch pipe, a showerhead, a 4-inch bolt, a metal clamp and a cigarette lighter. District Attorney Reid also said that Labbe had placed items in the dogs’ mouth or near them, including brake fluid which is toxic if ingested. Labbe was indicted on five counts of attempted cruelty to animals and a single count of criminal mischief.

Labbe tortured the dogs for several days and one witness told prosecutors that Labbe had stated that “she hated the dogs.” Labbe was apparently jealous of the attention Kohn gave the dogs. The two dogs became so terrified of Labbe, that Labbe told a friend that Magic and Pebbles would urinate on the floor when she walked into a room.

Judge Wageling agreed with the recommended sentence by prosecutors of 4 to 8 years and also forbid Labbe from ever owning or having control of an animal ever again. Wageling who is not a pet owner stated, “What she did to them was tremendously scary and painful.”

Labbe’s attorney, Gleaseon, plans to appeal. “Animal rights are important but they are not to be equated with what happens to human beings. Dogs are dogs and people are people,” he said.

Krohn, who has a 3-year-old son with Labbe, still suffers from the torture Labbe inflicted on his dogs. “Magic will forever be shy of people and I may never trust anyone again,” He said.