A woman from West Virginia has been acquitted on the obstruction of justice charges she was facing for trying to step in between a dog and the police officer who was about to shoot him.  Tiffanie Hupp was arrested for her efforts, and State Trooper Seth Cook claimed that he was just doing as he was trained.

Cook claims that West Virginia state troopers are all trained to kill any dog that approaches them in the course of their duty.  It doesn’t matter if the dog is aggressive or charging, or chained up with a wagging tail, like Buddy was on the day the incident took place.

The police hadn’t even been called to Hupp’s family’s property for anything that had to do with a dog.  They were called in to respond to a heated dispute between her father-in-law and a neighbor.  Also, it was Hupp’s family who called the police in the first place.

When Cook arrived on the scene, he went over to talk to the neighbors first.  After he was finished, he walked over to Hupp’s property and that’s when Buddy started walking to him.  Then the trooper pulled his gun on Buddy and was about to fire before Hupp stepped in between them, stopping the officer from shooting.

Hupp’s husband, Ryan Hupp, was filming the incident as soon as the officer stepped on to their property.  According to Hupp, her husband is all too familiar with issues of police brutality, and wanted to document the officer’s actions.  If he hadn’t, there wouldn’t have been any evidence of the incident at all.

“If it wasn’t for him recording, there’d be nothing,” Hupp said.  “He knew about police brutality before I did.  But that’s why the camera is shaking, because of the adrenaline.  When they read those words ‘not guilty’, we were relieved.  It’s hard to describe the feeling unless it’s actually happening to you.  Justice is good, though.”

After stepping between the officer and the dog, Hupp was arrested.  She was put in a patrol car, and that’s not all the officer did that was a little questionable.

“After he put me in the patrol car and arrested me, he just walks up the trailer and up to the phones and, whatever devices were on chargers, he took them,” she said.  “He took my husband’s phone, he took my phone, he took my sister-in-law’s and my son’s tablet.  And we don’t use those phones or tablets anymore.  If my phone leaves my hands and goes into the hands of a cop, I kinda don’t trust that.  Without that video, it’s just my word against a state trooper.  Nobody is going to believe my word over law enforcement.”

It took almost a month of constantly calling the police department to get their devices back.  At first, they were refusing to return any of the devices unless Hupp or her husband gave up the password protection on their phones.  This would have allowed them to search the phones without a warrant, something they are not allowed to do.

At the trial, Cook was the only one to testify on his own behalf.  He claimed that Hupp had a crossbow in her hands, and also raised her hand up to Cook during the incident.  Hupp’s attorneys had a few witnesses to bring, but really only needed to show the phone video of what happened.  At no time does Hupp have any weapons on her person, nor does she make any threatening gestures toward the officer at all.  The whole trial took six hours, and at the end of it all Hupp was acquitted.

Part one of this for Hupp and her family is over, but now they are working to file a civil lawsuit against the state troopers.  They’re working on getting a lawyer to help them with their situation.  Stay tuned to Life With Dogs for more information as it’s released. 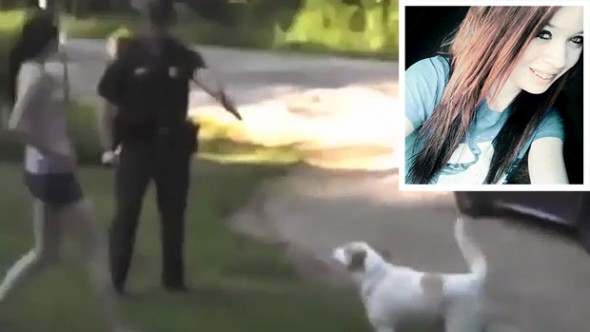