A starving dog in central Florida was rescued by a neighbor who raised awareness to his anguish on Facebook after animal control ignored her repeated calls to help.

Brenda Gombola said she had called Deltona Animal Control to report the worsening condition of her next door neighbor’s dogs for months, and was worried that they would die if someone didn’t step in soon.

It was last summer when she began to notice that one of the dogs, Trigger, was losing weight.  She and her husband attempted to feed them, but were thwarted by the owner.

“I would open the gate and then we would put the food and water in there,” she explained.

Gombola sent emails with photos attached to animal control in October, and they ordered the dogs’ owner to get Trigger and Bella to a vet, but no further action was taken.  Their condition continued to deteriorate.

Monday was the last straw for Gombola.  She called animal control again, but was hung up on.  Not knowing what else to do, the concerned and exasperated neighbor started a Facebook page to raise awareness.  She posted photos and information about the dogs on Help Save Trigger and Bella and uploaded a video from four years ago that showed a much healthier Trigger.  She also included phone numbers for Deltona’s mayor and other city officials. 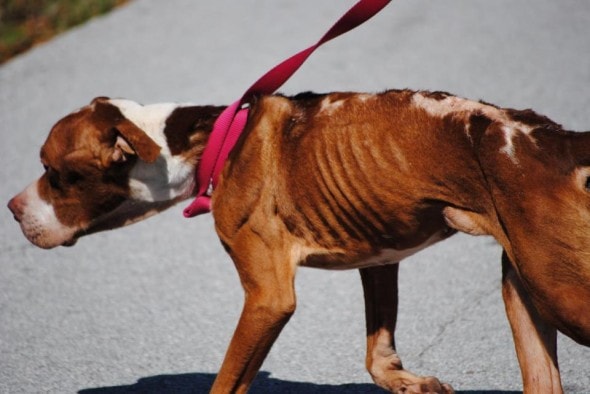 Within a few hours, the page had 2,000 likes from people worldwide.  Animal control showed up to her home that day.

Finally, after nearly a year of helplessly watching her fur-neighbors’ health decline, action was taken:  Trigger was surrendered by his owner and brought to the Halifax Humane Society.

“This is a pretty severe case, but unfortunately we do see animals come in in this condition, more than we’d like to,” said Tyler Stover of Halifax Humane Society.

Bella still remains with her owner, which has Gombola apprehensive.  The owner has once again been ordered to get the slightly underweight dog to a vet, but this time if he does not comply, Bella will be removed from the home.

Trigger underwent a string of tests, and weighed in at only 30 pounds.  His former owner is not facing any charges at this point in time.

“At this point in time, we don’t have any proof that this was an intentional, malicious act, and from what the vet has told us, that the dog appears to be suffering from a severe infestation of hook worms,” said Lee Lopez, a Deltona City spokesperson.

Gombola is fuming, and believes the animal cruelty laws need to be harsher.

Vets believe Trigger will recover and be put up for adoption.