When Zoey Chandler came home on January 2nd, she came to home to find everything she had burnt in a fire.  According to firefighters, the blaze started in her kitchen, and she thought she lost everything, including her dog.  However, about twelve hours after it was put out, her dog was found, safe and sound.

Eleven people also had to evacuate the burning building.  Nine other adults and two children also lost their homes.  Thankfully, everyone else made it out of there in time, except no one had seen Chandler’s dog, and no one was sure if the dog made it out of the fire or not.

Chandler began looking around the neighborhood for Taffy.  Of course no one is happy to have lost everything they own in a fire, but she was really concerned about Taffy, and whether she made it out or not.  She searched and searched, and finally found Taffy at about 10 am the next day.

“Oh my God, baby. I thought I lost you,” said Chandler.  “I lost everything, but I got my baby … I’ve been looking for my dog all morning, and I thought she got caught up in the fire, but I didn’t give up.  I walked high and low for my dog.”

The American Red Cross is assisting the families affected by the fire for now.  The full extent of the cause of the fire is still under investigation, however more information from the fire marshal’s office is expected to be released today.

Chandler says that even though she lost her material possessions in the fire, she didn’t lose her Taffy, and that’s something to really be thankful for.

“Thank you, God, for finding my dog,” she said.  “I might not have everything, but I do have my life.  So I guess this is a new beginning for me.” 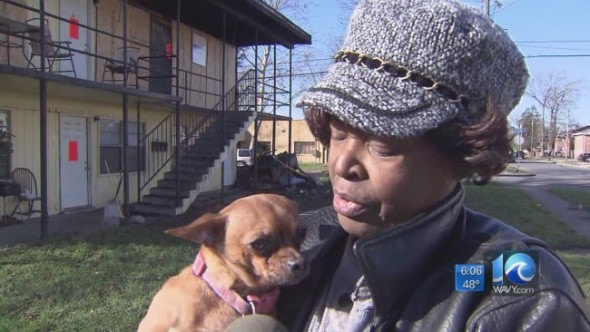