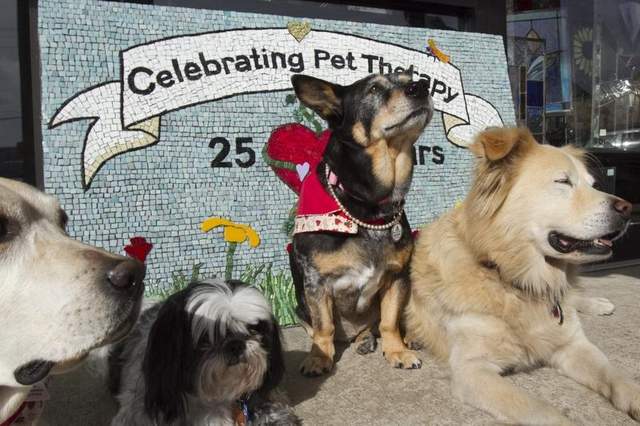 Cobalis says Woody “seemed to have a sense of duty” about visiting children.

“One boy was recovering from a head injury and was real shaky on his feet, but he wanted to walk the dog so badly I handed the leash to him,” she said.  “Woody had a sixth sense and walked really slowly.”

Now approximately 50 artists have spent the last several months creating panels honoring therapy dogs for a 26-foot-long wall in the healing garden at the Dell Children’s Medical Center of Central Texas.  The panels are mosaics made of glass tiles.

Award-winning mosaic artist Dianne Sonnenberg said being a part of the project “makes me feel warm and fuzzy.”

One of the panels shows a chocolate Labrador standing in the grass, with children’s hands reaching out to touch her.  Other panels show a dog wearing a nurse’s cap, a dog standing by an IV stand, and a dog with a halo.

“I’ve never done such a huge project before, but this is such a good thing to do,” said volunteer Cindy Sailor.

Susan Ribnick, one of the chairpersons for the program says there have been 52 dogs in it since it all started with Woody.  Volunteers bring their dogs to visit sick and injured children a few times a week.  Parents have nothing but good things to say about the program.

Polly Coons’ five-year-old daughter was in the hospital to have a tumor removed, and had difficulty getting out of bed until someone brought in one of their dogs.

“She got out of bed and sat and petted it,” Coons said.  Her daughter had been visited by four of the dogs in the program, and wanted to stay to meet them all.  “They got her excited and relaxed somehow.”

Jennifer Phillips has been a volunteer with the program since 1993.  Her corgi named Thistle loved to snuggle with kids in their beds.

“There were times when she brought children out of a coma,” Phillips said.  “They were not really conscious and she was in the bed with them and they would rub her fur.”

She says the mosaic wall will be a great way to demonstrate how dogs can help sick children.

“It’s a very colorful, positive way of exposing people to the fact that these dogs are healing animals,” Phillips said.