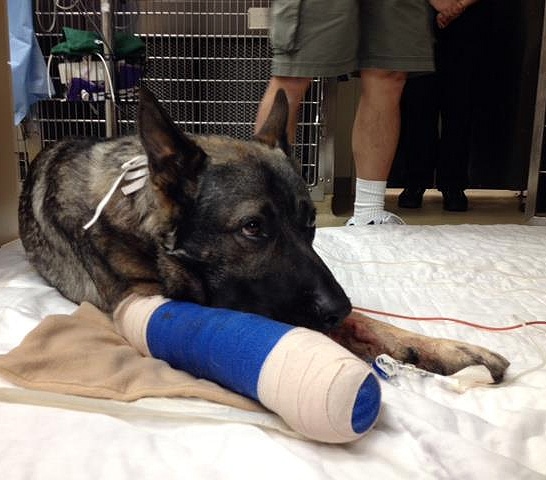 On May 18, 2012 at 9:50 a.m., Sacramento police attempted to stop a stolen vehicle in the area of Broadway and 24th Street. The driver led officers on a high speed chase through several residential neighborhoods, exceeding speeds of 70 mph. Officers soon cancelled the pursuit due to the driver narrowly missing a group of school-aged children.

Several minutes later, the vehicle was located unoccupied near 4th Avenue and Marty Way. Responding officers saturated the area and soon located a male and female on foot, matching the suspect’s description. As officers made contact with the pair, they fled along Riverside Boulevard towards Robertson Way. The female was immediately apprehended by officers. The male continued to run into a nearby backyard where an Officer and his K9 partner, Bodie, gave chase.

While in the backyard, the male suspect fired multiple rounds towards the officer and his partner, striking Bodie in the face and the paw. Fearing for the safety of himself and his partners, Bodie’s handler returned fire, striking the suspect multiple times in the upper body. Officers retreated and surrounded the home until members of the SWAT team determined the scene was safe. Medical personnel arrived on scene and declared the suspect deceased. After being shot, Bodie was immediately rushed to an animal hospital by his handler.

Bodie entered in critical but stable condition and underwent surgery, and is now improving after a weekend of uncertainty. As messages of support pour in from around the world, vets responsible for his care have delivered some very good news: if all goes according to schedule, Bodie will go home on Thursday.

Update(6/27/12): Bodie has just been released from a VCA animal hospital after a second successful surgery to repair his jaw. A metal plate was installed and bone marrow from his shoulder was transferred to the injured area. 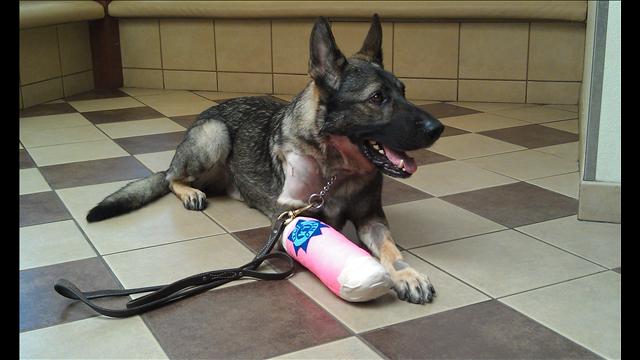