JOINT BASE CHARLESTON, S.C. — Esther may look like an ordinary dog, but to retired Marine Staff Sgt. Dean Suthard, she is a life saver.

Suthard took possession of the two-year old Labradoodle during a May 9 ceremony at the Naval Consolidated Brig Charleston, where Esther had spent almost a year training for her new mission in life as part of the Carolina Canines for Service program.

Suthard is a veteran of deployments to Panama where he helped provide security during the turnover of the Panama Canal, relief assistance in New Orleans after Hurricane Katrina in 2005 as well as three deployments to Iraq. It was on his second deployment with the 1st Battalion 8th Marine Regiment in 2004 that he sustained injuries during a combat patrol, breaking his spine in several places.

After recovering, Suthard pushed on through the pain and discomfort and continued to serve in the Marine Corps, completing a third tour of duty in Iraq. However, in 2009, while out jogging, the fragile bones in his spine shifted and his condition worsened. He lost most of the feeling in both of his legs.

Suthard was left with limited mobility and was only able to walk with the use of two canes. The pain didn’t let him sleep for more than two hours each night.

Now, with the help of Esther, Suthard is able to start putting his life back together. With Esther by his side, he is able to combat his Post Traumatic Stress Disorder and can go places on his own when only weeks ago, he had to have his wife with him for the fear that somebody was always behind him. 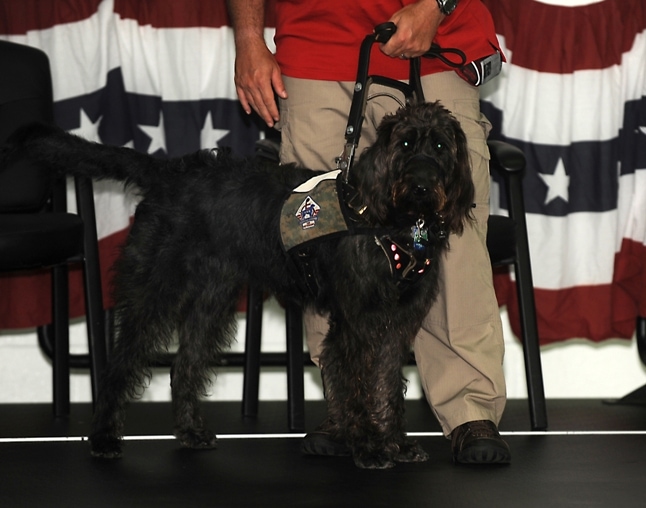 “I am already walking without my canes and I’ve slept a full seven hours every night; it is a miracle,” said Suthard.

CCFS is a national program that understands the instinctive bond dogs have with their human counterparts and provides disabled veterans with quality, trained service dogs. The dogs, many of which are rescued from local animal shelters, are trained by military prisoners at the NCBC. The dogs accompany and provide help to warriors who were injured while serving their country.

“Esther is like a life partner,” said Suthard. “She is there when I need her, she knows when I feel bad, and she knows how to make me feel better. I couldn’t ask for more.”