An Australian Boxer named Max has good reason to thank his lucky stars this week after surviving an injury that would normally be considered fatal. Tim Horvat was putting the finishing touches on a deck project when Max ran a little too close to the end of his nail gun, intercepting a nail intended for a very different target. Horvat initially thought the gun had missed Max, but ended up rushing the dog to the Melbourne Veterinary Specialist Centre after noticing a nail head protruding from his skull.

Max is recovering nicely after vets performed a craniectomy to remove the nail from his brain, and the Horvat’s are now in possession of a remarkable souvenir pic: 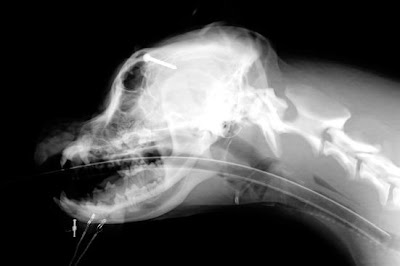