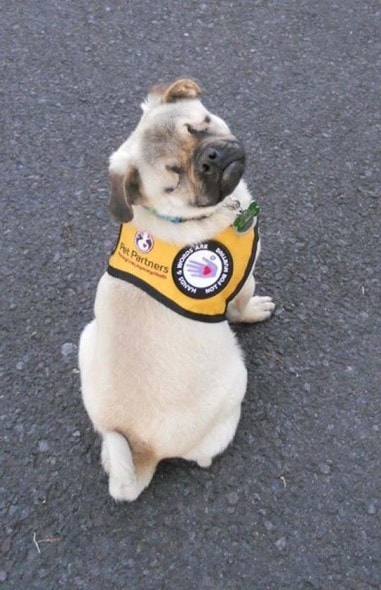 When Xander was a puppy he lost both his eyes after suffering a head injury. He was then surrendered by his owners to a local animal shelter. Thankfully one couple came along and saw great potential in Xander and he is now a certified therapy dog.

When Marcie and Rodney Beedy saw Xander at the Klamath Animal Shelter last January they knew he was special.

“I loved him,” said Rodney. “Just his personality and everything, I was saying, “I take this dog, he’s going to make a fantastic therapy dog.”

The couple adopted the pug and gave him his name Xander. They knew his calm and loving personality would make him well suited to be a therapy dog so they began his training. Xander excelled and was soon a Certified Therapy Dog.

Xander now helps others, particularly those who have suffered from child and spousal abuse.

“Xander’s mission is to stop violence, till then he will comfort the young and old till that day comes,” it reads on Xander’s Facebook page.

Xander not only has a calm and loving personality that brings great comfort to others but he has a keen sense for those in need.

“A lot of times he’ll hear a child crying at an event and he’s bolted several times, at least 50 feet over to this child to comfort them,” said Rodney.

1 thought on “Xander the Blind Pug Becomes a Therapy Dog”