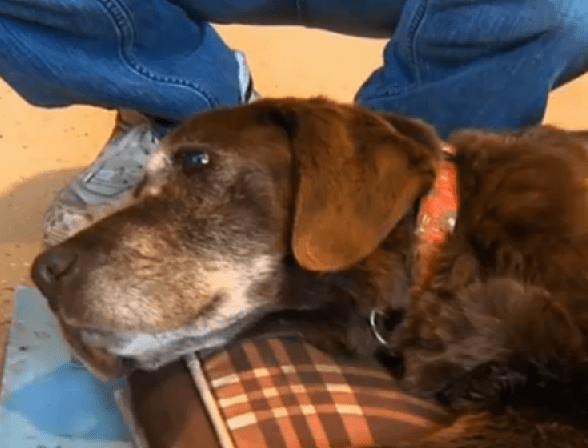 When a 17-year-old Labrador/springer mix went missing the day after Christmas her owner feared the worst. Maggie can’t hear very well but an 11-year-old boy helped bring her home in a unique way.

The day after Christmas Maggie disappeared from her home in Dundee, New York during a heavy snowstorm. Her owner went looking, but the conditions were white out and there was no sign of the elderly dog. After several days her owner was losing hope. Maggie doesn’t see well, hear very well or even get around very well. Even if her owner called her name and she was nearby it is unlikely she would respond.

Five days later 11-year-old Austin Gibson was making a sound that was distinct enough for Maggie to hear and luckily she was close enough to hear it. “I was sitting on a snow bank practicing my turkey call when I saw something brown and I called my dad,” said Austin. “She was just standing there wagging her tail and looking at us.” Maggie had burrowed into the snow by Austin’s home just a mile from her own home.

Austin, who is a dog lover, is happy he could help. Maggie’s owner is thankful and thrilled to have Maggie back, “It’s kind of a miracle to me.”