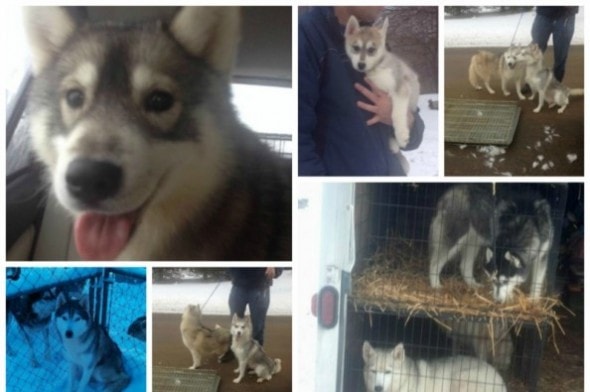 Gia, a Siberian Husky, was brought home to her new owner after the owner adopted her from a neighbor, as happens so often.

Her new owner was excited about caring for her and providing a home. However, her excitement soon turned to dismay as Gia’s health spiraled out of control. Gia soon developed acute kidney failure and ended up passing away far too young, at only 6 years old!

Dealing with intense feelings of grief and anger, Gia’s owner wanted answers! She wanted to know why her sweet Gia became sick at such a young age.

As part of her search for such answers, Gia’s breeders were tracked down in Mexico, New York. After an extremely detailed search, it was determined that the breeders, Lynne Overy (aka Leone) and John Steib had sold countless Siberian Huskies and Golden Retrievers.

The horrific conditions had led to many of them being sold sick, similarly to Gia. They had previously operated a similar puppy mill in New Jersey, but after it was shut down, they fled to New York and continued their same horrid work.

In New York, they began to start up puppy mills in many small towns, such as Mexico, in which there exist little to no dog control measures.

After 18 months of searching and praying, Gia’s owner received the best Christmas gift that she could ask for. On Christmas Day, the phone rang and it turned out that Overy and Steib had been located in Hannibal, New York!

Apparently, Overy had placed a call to the Hannibal dog control department and requested that they take all of her dogs.

A huge collaborative rescue effort soon ensued, involving local Hannibal volunteers and a no-kill rescue organization, HEART Animal Rescue and Adoption Team. Gia’s owner had called HEART in order to help her get the Huskies off to safety once rescued.

With less than 12 hours of preparation, the volunteers pulled off the rescue mission successfully. Originally believing they would be rescuing 16 Huskies, they ended up saving more than twice that-a total of 33!

Despite the increased number of dogs needing care, the volunteers from HEART knew they couldn’t just leave any behind. Thankfully, they received an overwhelming response and each of the dogs already has either a foster or adoptive home!

Two Huskies even escaped from their foster homes and are back in their homes, learning to trust, thanks to the community coming together to ensure their safe return.

Volunteers at HEART were really touched by the outpouring of kindness from the public and the way complete strangers rallied together for these dogs.

Sadly, there are many other similar cases in the dark world of commercial breeding or “puppy mills.” Often, these dogs are living in horribly inhumane conditions, being kept in cages and not receiving proper veterinary care, even when sick or injured. The females are forced to give birth to litter after litter. Law enforcement often have their hands tied and can do very little to help the victims.

Fortunately, change is happening bit by bit thanks to rescue groups like HEART who not only are working to place these victims in loving homes but are also encouraging citizens to petition for stronger legislation against puppy mills. One such piece of legislation just passed this past week, when Governor of New York Andrew M. Cuomo, enabling local municipalities to enact their own stricter laws to combat puppy mills.

Now everyone is looking forward hopefully to further change and, in the meanwhile, enjoying the sweet dogs that have been rescued.

HEART Animal Rescue and Adoption Team is a no-kill, non-profit 501(c)3 organization dedicated to alleviating the suffering of neglected, injured, orphaned, sick or abused animals in Western New York. They rescue, foster and place companion animals up for adoption and believe that every animal deserves a second chance. Each animal is placed in a foster home, as HEART has no shelter, the animals are better able to receive healing and love in these homes.