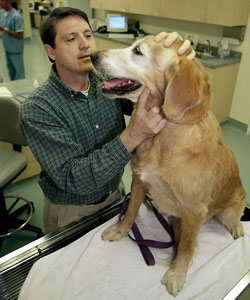 The AKC Canine Health Foundation has announced approval of 17 research grants to 13 research institutions and universities specifically for the study of canine health. The grants total more than $1.7 million in funding. This research will help provide better treatments and diagnosis and hopefully help enhance understanding of what causes some of the major diseases found in dogs.

A wide range of health concerns will be covered by the new grants. Six of the grants will focus on cancer, which is the number one disease-killer of dogs.  Grant money will also research periodontal disease, the most common clinical condition occurring in adult dogs. Some of the funding will go to research prevention of tick-borne diseases and the funding will also hope to aid in the development of vaccines and treatment methods.

“By funding grants in diverse program areas CHF is leading the way, improving the quality of life for all dogs, while at the same time supporting research that targets breed-specific issues,” says CHF’s Chief Scientific Officer Dr. Shila Nordone. Since 1995 CHF has invested more than $29 million in canine health research.