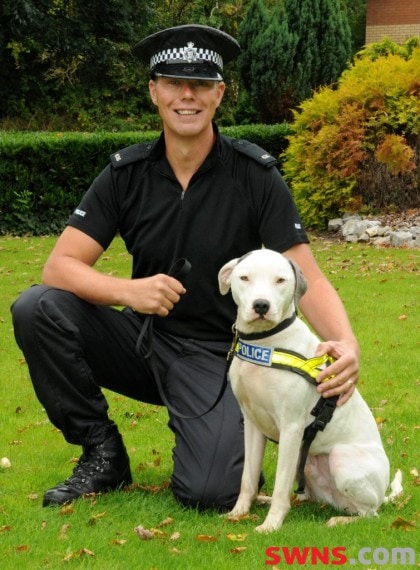 Kos, a Staffordshire bull terrier cross, was a rescue dog looking for a home 18 months ago. He now not only has a new home, but a new job. Kos is the first of his breed in Britain to be trained to sniff out drugs, currency and firearms.

Kos was at the RSPCA in the United Kingdom waiting for a home when he was donated to Avon and Somerset Police. Typically, the police force uses springer spaniels and weimaraners for police sniffer dogs, but Kos has been well trained and is fitting in at his new job. “It didn’t take any longer to train him than the spaniels we have, and some of those are also rescue dogs,” said PC Lee Webb.

Webb is the one who picked up Kos from the RSPCA in West Hatchet, Somerset. Kos lives with Webb and three other dogs, two of which are training to be drug dogs as well. Webb has been a dog handler for ten years and was in charge of Kos’ training. “We start them on toys and then train them on the scents, which they come to associate with play. Kos was very excitable on his first day on the job. He absolutely loves it.” Webb sees the bad reputation that Staffordshire terriers get as unfair, “Kos is the gentlest and kindest of dogs. He’s always been very playful and he absolutely loves the game of searching.”

Kos’ first night on the job was a successful one. He found heroin in one of the cars he searched. Webb is pleased with Kos’ performance and hopes other rescue dogs will be able to follow in his footsteps.