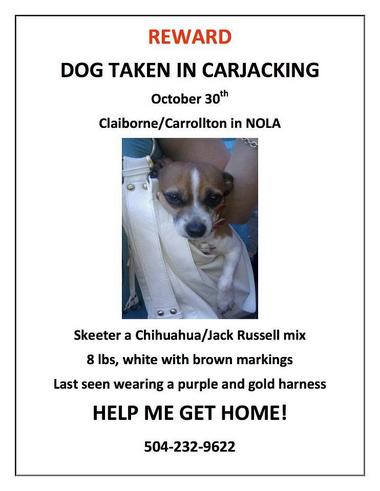 New Orleans resident Meg Hall was leaving her boyfriend’s mother’s house on Tuesday night when a carjacker approached her with a gun and fled with her dog in tow.  She was just about to get in her Lincoln Navigator when the gunman attacked her.  He punched her in the face before knocking her to the ground. 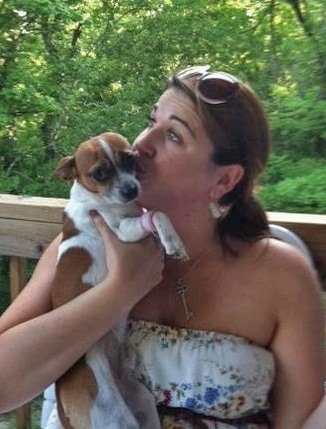 Hall’s Chihuahua/Jack Russell mix, Skeeter, was sitting on the SUV’s center console when the carjacker climbed inside.  Hall immediately got back on her feet and began pounding on the windows, pleading for him to give her dog back, but the man quickly sped away.

In addition to the tan 2000 model Lincoln Navigator, Louisiana license plate TFX 907, the thief made off with her purse, wallet and cell phone.  But the only thing Hall is concerned with getting back is Skeeter.

Friends and family joined together with Hall to raise a $500 reward.  The Humane Society of Louisiana also chipped in $500.  Humane Society Director Jeff Dorson urges anyone with information on Skeeter’s whereabouts to call (888)648-6263.  He can also be dropped off at any animal shelter with no questions asked.

Hall is desperately missing her buddy, who she adopted in 2005 after Hurricane Rita.  She says he is very friendly, and will come to anyone who calls his name.

“He’s been my best friend and roommate for a long time,” said Hall.  “I can’t imagine not getting him back.  He’s the perfect dog for me…. Skeeter goes with me everywhere.  I really miss him.”