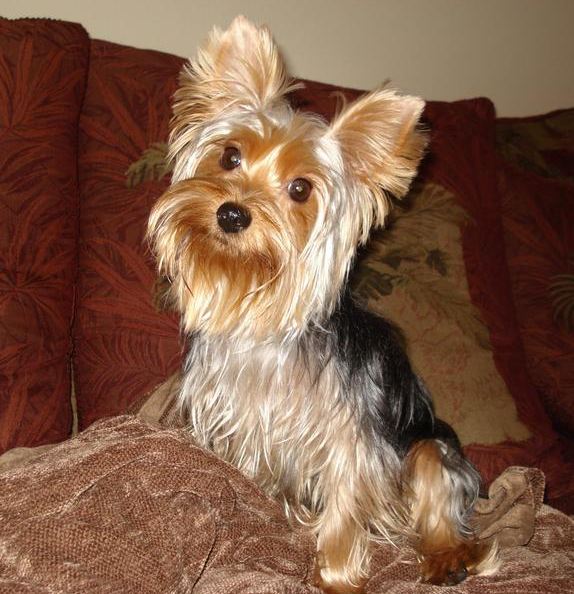 A woman named Ellie and her husband traveled from their South Florida home to Orlando for a few days in late October, taking their beloved 7 year old Yorkshire Terrier Bengi along. They carefully selected a pet friendly hotel, but due to carelessness on the part of a housekeeper, Bengi got out of the room and went missing in an area unfamiliar to him, and far from home.

Ellie went to work spreading the word on her missing companion and posting on multiple websites, including YoukieTalk, Craigslist, and PAWSitive Strides, to name a few.  Her efforts to get Bengi’s story on TV were met with delays, as search efforts seemed not to pay off.

Finally, after nearly three weeks, workers at Disney’s Casting Center, about 3 miles from the hotel, found the little dog and arranged for him to be reunited with his family. The reunion was captured in the video below.

Ellie’s initial Lost and Found posts at YorkieTalk show her great love and concern for her lost, then found, dog.

October 29, at YorkieTalk.com :
I need to vent, I need comfort, I need yorkie lovers’ friends…
My beloved Bengi got lost over the weekend. We are from South Florida but were spending a few days in the Orlando area. We picked a pet friendly hotel and notified the receptionist when I checked in that we had a dog, and paid the pet fee. By the time I got there, they didn’t know where he went and we didn’t know where else to look for other than the last place he was seen at.
We tried looking over the weekend and visited shelters, posted on craigslist and contacted the hotels in the area, but we had no luck.
If you live in the area and see him or know somebody that does, please help me find him. We are totally heartbroken, I can’t stop crying all day and my 2 1/2 daughter keeps calling him and looking for him under the bed

Hi everybody! words cannot express how I feel right now!my baby is home!!! I can’t believe it!!! God is so good to us and he has answer our prayers; This is such a miracle!!!!

He is ok, he was very stinky but he didn’t look too bad at all, no knots or stuff stuck in his hair.He is, however, very thin, I can feel all his bones in his little body; we are taking him to the vet tomorrow to make sure he is fine.

Ok, so yesterday around 2 pm I received this call on my cell, the area code was from the Orlando area so that always gets me excited, but then the caller ID identified the call as “Disney”. I’m like, Disney? maybe I won tickets or something.. So I picked up and the conversation went something like this:
– “Hi, I’m calling from the Animal Kingdom hospital, we have your dog”
– What??? how did you get my number? are you reading the number from his collar?
– Yes
– Is his collar camo green and his name is Bengi?
– Yes
– OMG!!!!!!!!!! OMG!!!!!! OMG!!!!! I can’t believe it, you found my dog (CRYING REAL HARD), he’s been lost for 3 weeks!
– 3 weeks!!!!! wow, he looks like he’s doing fine.

Ok, so she told me he was found in the Disney Casting Center (which is about 3 miles from the hotel) and that they brought him to the hospital so they can take care of contacting the owner and holding him in the meantime. The hospital is located inside the Animal Kingdom, in the Rafiki Planet Watch section; for the ones that have being there, it’s where they have these big glass windows where you can see when they perform procedures to animals. They were closing at 5pm, so were not going tot make it in time yesterday, so we arranged to meet today in the morning. They assured me he was well taken care of, they fed him and gave him a blanket and stuff.

So today we left the house early in the morning and headed over there. I didn’t want to say much till we actually saw him cause after all we’ve been through I wanted to see him with my own eyes; and of course it was him! my little baby boy! I can’t believe he’s been outside by himself for almost 3 weeks, poor baby, I just can’t imagine what he did all those days. I’m pretty sure he wasn’t picked up by anybody cause the would have called me, or take off the collar and never return him. But the fact that he was still wearing his collar tells me he was by himself all this time. The ladies that brought him to me didn’t know much more than that; We met at the entrance of Animal kingdom park, before the parking booths.

I don’t know how he managed to stay away from people [for all] of this time; I’m sure people saw him from time to time, but he would always disappear before anybody could catch him; he’s not the kind of dog that would go to a stranger, unless we approve them. He must have been so scared, and hungry and cold!, but he is home now. He does have a few bites here and there, but no fleas.

He was very very stinky, and because we didn’t know where he’s been and we had one of our daughters with us we needed to get him clean, so we stopped at a Petco so he could have a bath before the 3 1/2 hour car ride back home. The picture I posted on Facebook was taken before the bath, so you can see he wasn’t looking that dirty.

Most of the trip back home he was very excited and he cried a lot and then he barked at us (he had his moment when he was a little mad at us ), and then cried some more, kisses kisses kisses and after about 2 hours he was finally able to relax, but he didn’t fall asleep. Then we went to my moms house, cause the grandparents wanted to see him so bad! and now he’s sleeping in his bed.

1 thought on “Missing Yorkie Bengi is Reunited With His Family”