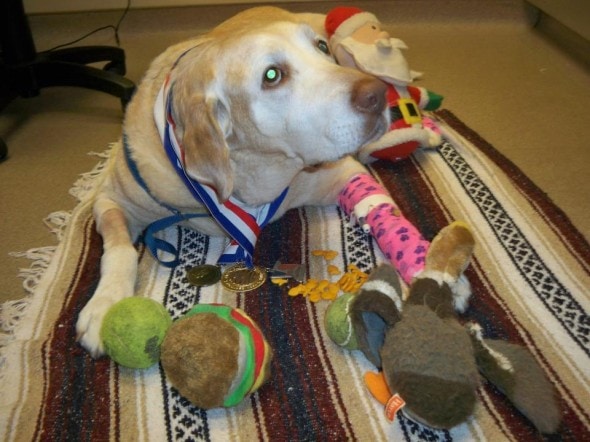 The American Humane Association’s 2012 Hero Dog of the Year, Gabe, has lost his battle with cancer and passed away on Wednesday.

Gabe was rescued as a puppy from a Houston shelter just one day before he was going to be euthanized. He deployed to Iraq in 2006 with Sgt. 1st Class Charles “Chuck” Shuck. The two survived 210 combat missions. Last year Gabe retired and started campaigning for the Hero Dog of the Year. The award won thousands of dollars for the nonprofit United States War Dog Association, sending care packages to military dogs and their handlers fighting in Afghanistan. Gabe was 10 years old when he passed away.

On Tuesday, Gabe stopped eating and Sgt. Shuck knew things weren’t right. He started to have difficulty breathing and was taken to the emergency animal hospital. Gabe had been suffering from hemangiosarcoma, cancer in his liver and spleen. The cancer had spread too far, and on Wednesday Gabe was put to rest after he was surrounded by his favorite toys, snacks and his medals.

“My heart is truly broken in a million pieces. I took him for a final walk, kissed him a thousand times, but I felt peace when he laid his head in my lap and left me,” said Sgt. Shuck.

No arrangements have been made yet for a memorial service.

“I can’t think about that right now,” said Shuck. “I don’t think I could get through it. I’m going to have him cremated and he gets buried with me when I die.”

“He represented the best of what man’s best friend means,” said American Humane Associations chief executive Robin Ganzert. “He exemplified the spirit of being man’s best friend and demonstrating extraordinary acts of courage.”

Gabe’s final days accrued thousands in medical bills. Anyone wishing to donate to help with the costs can send money to Chuck and Gabe’s address at:

All additional funds raised will go to other animals in need.