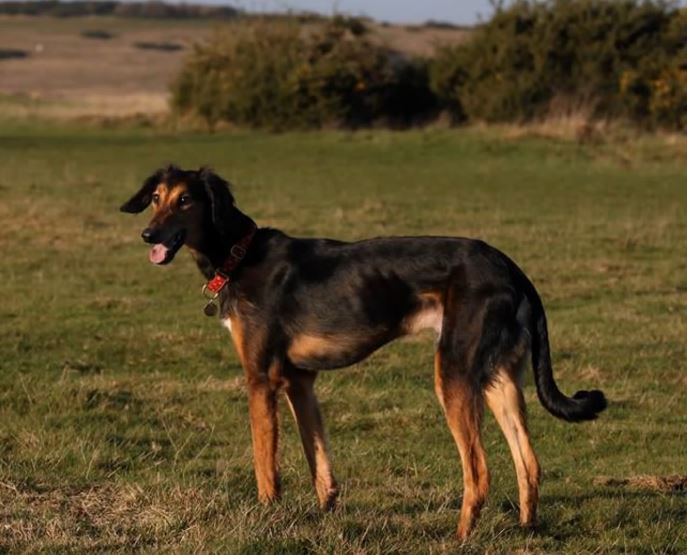 Dylan is now happy, healthy, handsome and enjoying life in his new home, six months after being found, shockingly emaciated and abandoned.

In November, UK animal charity PDSA – For Pets in Need of Vets launched a nationwide search for the PDSA Pet Survivor of 2014: the pet that has faced the worst injury or illness – yet lived to ‘tell the tail’. This led to an avalanche of extraordinary stories featuring courageous pets, doting owners and brilliant vets. The competition helped to raise money for the charity, with each texted vote donating £2 to the organization.

The Pet Survivor 2014 award, announced on December 21, went to a Salki-Lurcher mix dog named Dylan, who was abandoned down a country lane in July, 2014, horribly emaciated and covered in sores and mange. Dylan was picked up by a kind man who took him to a local shelter, where he wasn’t expected to last the night. After months of careful rehabilitation, Dylan made a good recovery and found his forever home with owner Jamie Birch, who was immediately smitten with him when she saw him on Facebook. After lots of love, Dylan is looking forward to a bright future with his new family.

Dylan was rescued, cared for, fostered and rehabilitated by Hounds First Sighthound Rescue, which operates throughout England, Scotland and Wales

The touching video (found below) shows Dylan’s remarkable transformation from a shockingly emaciated victim of extreme neglect to a handsome and happy boy.

We have not included any of Dylan’s shocking “before” photos in this post, but they are briefly seen in the video.

Hounds First Sighthound Rescue rescues and rehomes sighthounds including Lurchers, Greyhounds, Whippets and Salukis as well as other types of sighthound across the UK.