A six month old pit bull puppy newly renamed London has the grit and determination of an Olympian. Now, he has been given a new lease of life.

Based on what shelter and rescue workers have been able to piece together, the young puppy fell from a two or three story window at his home somewhere in Northern California, onto baking hot asphalt, earlier this summer. The impact completely shattered the bones in his front legs and the hot asphalt seriously burned and blistered his stomach and legs. His suffering and pain was severe and, and his owners reportedly neglected to pick him up and left his injuries untreated for a month.

A month after his damaging fall, the young dog was taken to the Humane Society of Del Norte’s shelter in Crescent City, CA, where he was deemed unadoptable because of his injuries, yet he won the hearts of his care takers there. It was determined that London’s legs could not be healed, because the damage from the untreated injuries was too severe. He had adjusted to his condition, though, using his back legs to get around, and his nose as a the third leg in a tripod when he needed to balance himself.

Despite his injuries, London has adapted and is really no different from other six month old puppies. London’s spirit and his loving nature convinced Humane Society staff to persevere and seek help elsewhere. “He loves to play, and he loves rolling around in the cool grass,” says Amanda Geise, of Vancouver, WA rescue, rehabilitation and hospice organization, Panda Paws.

The Humane Society of Del Norte reached out to Panda Paws, which provides aid to abused, homeless, and unadoptable dogs. Having been advised of London’s plight, sweet nature, and sheer determination to carry on, the rescue agreed to take him and get him help. 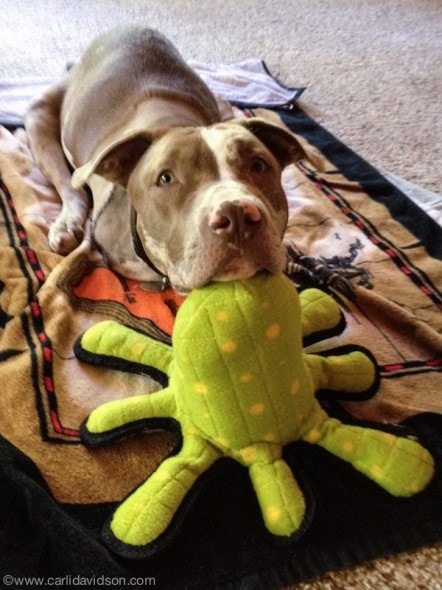 London was transported to the Animal Care Clinic in Vancouver, WA, where  Dr. Bradon Sherman performed the surgery to amputate both front legs. Dr. Sherman donated his services for half the cost of the surgery. London has been fitted for an all-terrain wheelchair cart that will give him better quality of life, and allow him to race around with other puppies.

Geise says “He has a heart of gold. He loves people, children, and other dogs. He is our very own Olympic champion.”

Once he is fully recovered, the rescue is hoping London will find a loving home with people who will overlook his disability and focus on his fabulous personality. That personality shines through in videos made with London and in the photographs that chronicle his progress.

Renowned photographer Carli Davidson, whose work with London is seen at left, photographed the surgery and will document London’s recovery and rehabilitation.

Amanda Geise has recently set London up with his own Facebook page.

Portland, OR KGW channel 8 broadcast this news feature on London.

Panda Paws made the following two videos with London, one before and one following the dog’s double amputation surgery which took his front legs. London is sweet, loving, playful and adorable throughout.