In the dead of winter Karma Rescue went to the Mojave desert to save the lives of 89 dogs being kept by an animal hoarder.  It was below zero, and they were living in makeshift kennels with chain link fences and no protection from the elements.  Arwen was one of those dogs, and she would likely not have lived much longer had Karma not intervened to save the lives of her and her canine companions when the hoarder realized she could not care for them and asked for help.

Since the Mojave desert is an unincorporated area, the rules and regulations around animal protection are rather loose.  The rescue workers, coordinated by Suzanne Happ, were horrified but got to work right away building temporary dog houses to protect them until they could all be moved.  Many of the dogs needed medical protection, and one of those most in need was Arwen, a 10 year old pit bull mix.  Arwen’s eyes were so inflamed from being exposed to the desert elements and sandstorms that she was in constant pain and would likely have been blind before long if she had not been rescued. 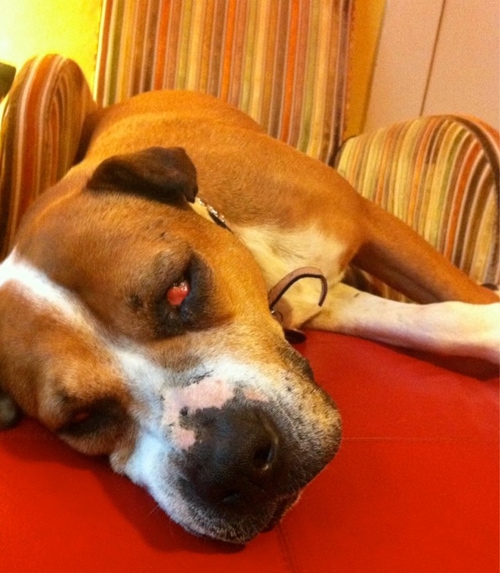 A volunteer named Alex rode in a van to safety with Arwen, and Alex ended up fostering Arwen as well.  “Her eyes looked really red all the time, and sometimes a red film would start to cover her eyes…she’s missing most of her teeth, probably because she had been gnawing at the fence,” said Alex.  “She had some behaviours that were very typical of dogs that had been unsocialized, in confinement, neglected.” 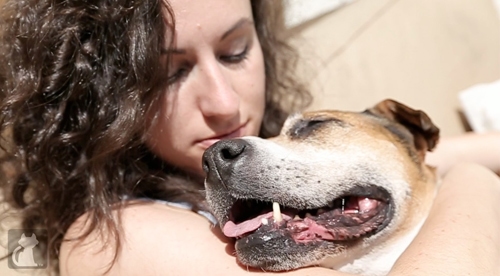 Alex decided to take charge of Arwen’s care, and became her mom.  “It’s amazing with dogs like Arwen, they really do make a full recovery and she doesn’t bear any grudge against people,” said Alex.  “We’ve been together through a lot so she really relies on me and trusts me and I feel like I have to live up to that.” 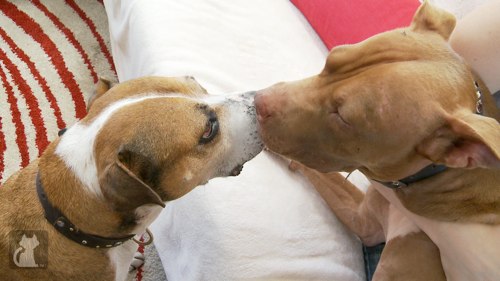 After vets removed scar tissue the size of cherries from each eye during surgery, Arwen began to heal.  With time, Arwen did heal and her pacing lessened, and  through the guidance of Alex and her new pit bull sibling, Keiko, Arwen learned how to be a dog again.  According to Alex, Arwen is a “perfect dog.”

To help support dogs like Arwen, or for more information about how to help, visit Karma Rescue or visit your local animal shelter.