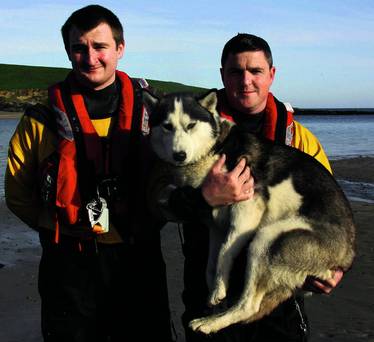 A pedigree husky owes his life to 2 men who were in the right place at the right time, and happen to have to right skills to save him.  Koda was sniffing the area near the edge of a cliff in Sandy Cove, Ireland, when he slipped fell into the sea below. he was quickly swept more than 100 yards from shore despite his efforts to get back on land.  His owner, Sally Anne Baggy, could go in after him because a jagged coral reef was between her and her dog.

Fortunately for Sally and Koda, two guardian angels were nearby and RNLI (Royal National Lifeboat Institution) volunteers Nick Searls and Ian Fitzgerald came to Koda’s rescue.  Searls dived into the heavy seas and swam over 200 metres to reach the now-floundering animal.  He managed to attach a harness and was able to swim slowly back to shore, dragging the weakened Koda with him, and was then assisted by safety line out of the sea by Ian Fitzgerald.

The RLNI is a charity that saves lives at sea around the coasts of Great Britain, Ireland, the Channel Islands and the Isle of Man, as well as on selected inland waterways.  They operate lifeboats and lifeboat stations and in 2011 rescued an average of 22 people per day and saved more than 140,000 lives since they were founded in 1824.  Lifeguards are paid, but lifeboat crew, like Searls and Fitzgerald, are unpaid volunteers who risk their lives to save others.  The RNLI is funded by voluntary donations and legacies.

Koda’s owner, Sally Ann, was relieved and grateful to have her baby back on land and Koda was immediately taken to a Kinsale vet, who said that, despite being exhausted and shocked, the dog was none the worse for her ordeal.