Janna and Marc Preston of Nunn, Colorado are the faces of animal rescue. The couple bought an old brick schoolhouse from the 1900s four years ago, and has turned it into a new home for dogs once on death row. 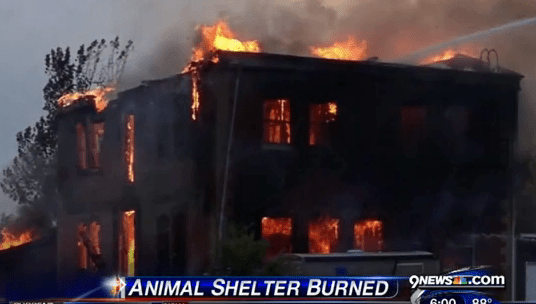 The Prestons used this house as a foster home for the dogs they rescued until their forever homes were found. “It puts a big smile on your face when you really save a dog,” Marc Preston said.

This past Friday night the wonderful safe haven for dogs had an unfortunate turn. A fire started on the porch of the house and as quickly as it was noticed, it began consuming what the couple had worked so hard to create.

11 dogs that sought shelter in the home at the time were the priority in getting out safely. “Everyone was in panic mode,” Preston explained.

In a short amount of time the roof of the house gave in, and the entire building was gone. The Prestons escaped with the clothes on their backs and their dogs in their arms.

With the help of neighbors and firefighters, the dogs were carried out of the burning building and brought into a safe fenced in yard. However, after counting the pack, they soon realized Reggae, a four-month old black lab was still inside.

When sifting through debris, firefighters found the puppy alive, quickly giving him oxygen that would eventually safe his life. The puppy’s name changed that day from ‘Reggae’ to ‘Lucky’.

Soon enough, the community the Preston’s were a part of did not think twice about helping in any way they can.

Within a day of the fire, a town fundraiser was planned. “Marc’s done a lot for the rescue community [and] for these dogs and it is only fitting that this situation is reversed for him now,” Joe Clingan, Nunn’s Chief of Police commented.

As much love as this couple has given to rescue dogs, they are sure feeling it in return from their community who is determined to rescue them.