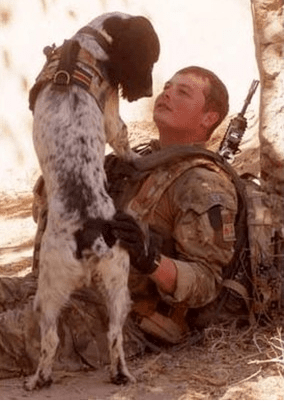 Theo’s story is one of courage, loss, heartbreak, and love.  The spring spaniel who died while on active duty in Afghanistan earlier this year was posthumously honored with the Dickin Medal, Britain’s highest award for bravery by animals.  Both British soldiers and military dogs attended the ceremony to honor their comrade and fallen hero.

Theo and his partner Lance Cpl. Liam Tasker, were assigned to search for roadside bombs, IED’s and bomb making equipment in Helmand province, a Taliban stronghold.  Tasker, who was 26 years old, was killed in a firefight last March.  In a strange twist of fate Theo had a seizure later that same day, and passed away.  Tasker’s mother, Jane Duffy, is convinced the devoted dog died of a broken heart from the loss of his constant companion. “They’ll be watching us, and they’ll be so proud,” she said. “I just wish they were here to get it themselves.” 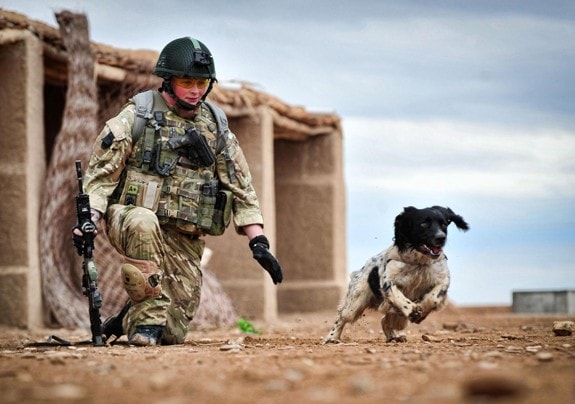 Theo is the 28th dog to receive this award since it’s inception in 1943.  The medal honors Maria Dickin, founder of animal charity PDSA (People’s Dispensary for Sick Animals).  Previous recipients include Rip, a mongrel who saved more than 100 people trapped in rubble during a WWII blitz after being rescued himself by a London Air Raid Warden.  New York Police Department German shepherd Apollo received the medal on behalf of all search and rescue dogs at the sites in New York and Washington, “for tireless courage in the service of humanity” after the Sept. 11 attacks.  Three horses and one cat have also had this honor bestowed upon them for their heroic contributions.

During his time in Afghanistan Theo made 14 confirmed operational finds, the most any search dog in Afghanistan has found to date.  Though the loss was unspeakably tragic,  Ms. Duffy is comforted knowing that her son and his best friend and ally are together forever.