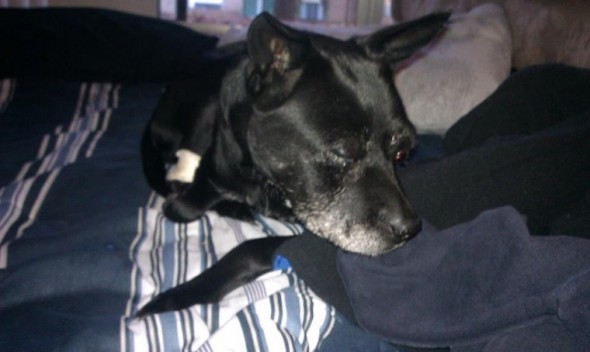 Dusk, a 7-year-old black mixed breed, was found in very bad shape last Friday morning in Bucks County, Pennsylvania. She had clearly been beaten in the head. She is recovering well, but the beating was significant enough to fracture her skull and make her lose her eye sight.

Bucks County Emergency Dispatcher Jessica Finnell received a call from a shop owner for an injured dog on Friday morning around 8 a.m. The call caused Finnell to break down into tears. Dusk was found sitting in a parking lot, avoiding people and had visibly been beaten in the head. The beating was so hard that her eyes had come out of their sockets.

Animal Control Officer Thomas Morris took Dusk to a nearby veterinary clinic where they were able to put her eyes back in the sockets, but there is little chance she will be able to see again. Dusk sustained multiple skull fractures, but lacked any abrasions or road rash that would indicate she had been hit by a car. The veterinarian explained that if someone takes a bat to a dog’s head it can often lead to the eyes popping out. The veterinarian believes this is what happened to Dusk.

Finnell was still thinking about the call on Friday night. She decided to visit the veterinary clinic and check up on Dusk. Finnell would end up taking Dusk home with her. She didn’t intend to keep Dusk permanently but wanted to give her a home until a proper one could be found. She started a ChipIn fund to help care for Dusk, who was easily adapting to living with Finnell and her family. Dusk was well-behaved, housebroken and was good with Finnell’s children. Finell suspected that Dusk might have a family.

Dusk did have a family and they spent all weekend looking for her. Marie Walkgorski and her son William Schilling became very concerned when Dusk didn’t show up for her food on Friday. They spent all Friday, Saturday and Sunday looking for the dog but couldn’t find her.They didn’t realize that the township had recently added Saturday hours for animal control calls, so they didn’t call until Monday. Walkgorski was so worried she couldn’t sleep all weekend.

On Monday Waligorski saw a story online about an injured dog found in Bristol Township and instantly recognized the dog as Dusk. Animal Control checked video and pictures of the dog and checked the county dog license number to confirm that Dusk was there dog. Finnell returned Dusk to Waligorski and Schilling on Tuesday. “She was excited, tail-wagging. She seems happy that they were there,” Finnell said. “I’m happy for her. I miss her like crazy but I’m happy she is back in her home and can have some of her normal life back.”

Dusk’s family discovered after reviewing home surveillance footage that she had been jumping their 6-foot back-yard fence almost every night, leaving around 2 a.m. and returning around 7 a.m. Dusk prefers to spend her time outdoors in the family’s fenced-in backyard, they keep a dog house out there for her. Unfortunately, Dusk’s escape on Friday morning led to an encounter with someone who likely beat her with a bat. Someone her family and authorities want to find.

Her family is horrified that someone could do something so horrible to their sweet dog. “It’s so crazy to know it was so close to home. It’s something you don’t really imagine happening,” Schilling said. “It’s really hard to take it all in that someone could really do that to a creature that has been nothing but loving.” Animal Control Officer Morris is determined to find those responsible for hurting Dusk and plans to prosecute to the fullest extent of the law. Finnell plans to keep the ChipIn fund open to continue to help Dusk and her medical needs. The ChipIn can be found here for those wishing to donate.