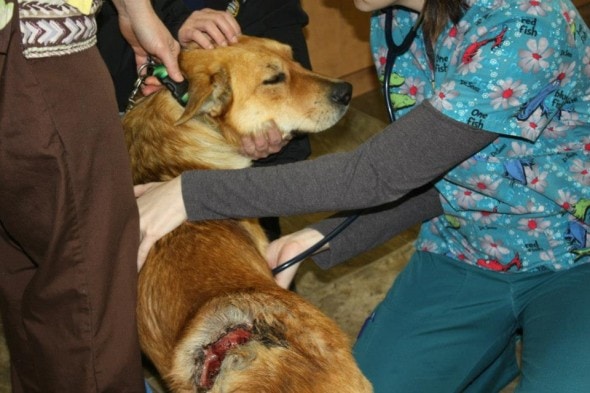 A stray dog with a terrible gunshot wound has been rescued from northern Manitoba and is now in the hands of veterinarians in Winnipeg.  Thanks to the efforts of the Manitoba German Shepherd Rescue the dog, who has been named Krieger, was picked up by volunteers who drove 5 hours each way to get him to safety.

Krieger was shot somewhere north of Dauphin and the gaping wound was left unattended for about 5 days until his rescue, causing significant infection according to veterinarian Noel Catrysse who performed the surgery .  “A lot of them originate from the northern reserves,” he said about injured dogs. “They run loose, no care whatsoever, they’re heavily parisitized, no vaccinations, no basic veterinarian care whatsoever.”

Cathy Dunning and her husband, Dave are the compassionate couple that responded to the plea on the Manitoba German Shepherd Rescue Facebook page and made the trek to pick up the injured pup.  Despite his condition and the pain he must have been in, he was described as being very affectionate.  “I went into the back and he just kind of flopped on my lap,” Cathy Dunning said. “He was like pressing into me, putting his head on my arms and stuff. He wanted constant cuddles and attention and love.  His tail was wagging. His eyes were bright. He was giving me kisses on the face.  I don’t know how he could pull through that.”

The Dunnings plan to foster Krieger until he is ready to be adopted, probably at least a month.  He still needs his vaccinations, and will need time to let the wound heal and learn to be a pet.  “We’re going to adopt him out and find him a forever home,” said Dunning.   The MGSR is accepting donations to help pay for his care and has information about his progress on their Facebook page.