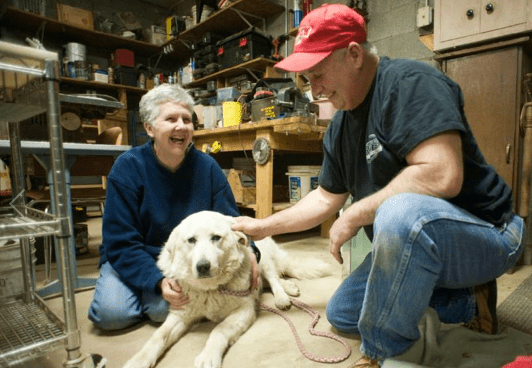 A beautiful and reclusive anatolian shepherd that is afraid of humans due to being abused as a pup is going back to his original rescuer after a 3 year absence.   The 170 pound dog is named Lily, and she was born on a farm in Appalachia, Ohio and kept confined to a small pen with no protection from the elements.  When Jackie Deems and her husband found her and her sister there they were ten months old.  They felt they had no choice but to bring them home and give them the freedom and life they deserved.

Anatolians are roaming, herding dogs and being confined for so long gave Lily a strong distrust of humans that she has never gotten over.  “I said to my husband, ‘Whether we want these dogs or not, we’ve got to take them,’” Deems recalled. “They need to be out, doing their job. No wonder she doesn’t trust humans.”

The Deemses have a sheep farm in Ohio and it was perfect for Lily who looked after them as if they were her own, even standing guard over the body of a sheep that had died in the night.  “When she guards animals, they’re all she cares about,” Deems said.  Lily was an excellent guard but roamed off the property as well and angry neighbours threatened to shoot her so Deems had to find her a new home to protect her.

She ended up about 10 miles away with Randy and Laurie Williams who had horses for Lily to look after.  But Lily did not trust the Williams and would not let them near her so she has been living outside for the past 3 years, coming up to the house only to eat.  They have only touched her once, after she was spooked by gunfire and hid inside a dog house.  Randy Williams was able to leash her and bring her into the house.  “We petted her up for two hours,” he said. “Then we left her in the garage for a couple hours when we went out.”

But Lily was terrified in the garage and wreaked havoc in their absence, tearing up drywall and wiring.  So they decided to let her be free, as she wished.  “I took her outside on a leash,” Williams said. “I petted her and said, ‘You can come around if you want, or you can stay away. It’s up to you.” I let her off, and that was the last time we touched her.”

That changed on Saturday.  Back in January a neighbour complained that Lily was off leash and the Williams’ were issued a warning to cage her or face a $500 fine.  They knew she could not be confined, so they contacted Deems who spoke with her neighbours and got them to agree to let Lily be around and not shoot her.   Now all they had to do was catch her.

They decided the best way to give her sedatives which they slipped into her food on Saturday morning.  Later they went looking for her and found her asleep in a nearby vacant house.  “She was under a table,” Williams said. “All I seen was her white head and those black eyes.”  When she woke up that evening she was surrounded by those who love her, family and friends who came to bid farewell.  Though she was elusive to them, she had become a fixture, and was much loved, especially by the William’s daughter Alison.

Now she is back home with the Deems family, happily herding sheep where she belongs.  Jackie Deems is grateful that so many people care so deeply for the gentle giant, and is elated to have her back home.