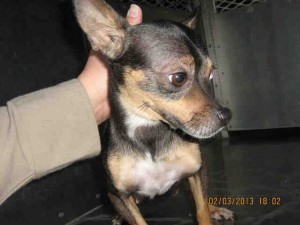 Kimmy is all heart, and so is Steve Montano the man who has nursed her back to health since she was found discarded like trash in an Arizona dumpster in February.  The 8 pound chihuahua was shivering and scared when she was discovered but settled in well at the shelter and with Montano who is currently fostering her and is an animal cruelty investigator.

Kimmy has been spayed and is ready to find her forever home, though she has been enjoying life with Montano and his other dog.  Though she loves naptime and cuddle time, she also loves to go for walks and according to Montano when the leash goes on “She puts her ears back and it’s full speed ahead,” he said, laughing.  The friendly dog warms hearts and will surely bring a lot of joy to her new family when they are united.

It is not known who disposed of her, but if they are caught they could face criminal charges.  It’s a mystery why anyone would do such a thing especially since there is a shelter in the area where dogs can be dropped off for free.  Montano is not alone and says many animal care workers bring home pets in need on a regular basis.  “I see other dogs, unfortunately, that don’t get another opportunity so I really wanted to make sure she had a chance to get healthy and get out there and meet someone who would love her.”

Kimmy will be available for adoption along with many other homeless dogs and cats at Pima Animal Care Center’s Tailwaggin’ Tailgate event on Saturday, March 9, in honor of the last University of Arizona basketball game of the regular season.   With any luck she will find her match and begin her new life this weekend.