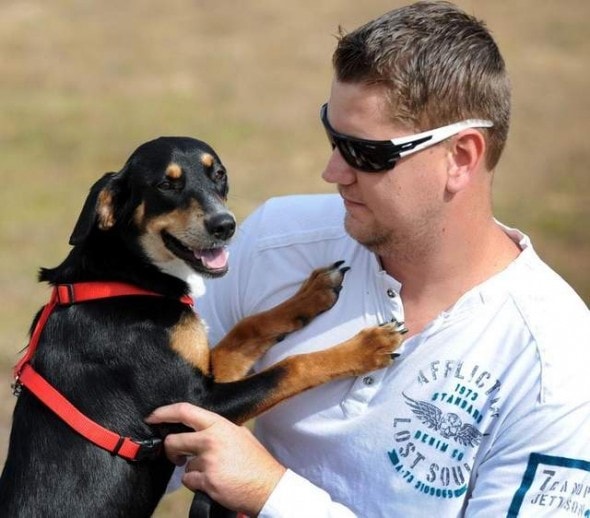 A terrible act of cruelty has ended happily for Samantha, a 9 month old hound and lab mix after she was saved by her now owner Patrick Goedecke of Florida.  On October 30th, Goedecke found the helpless pup at the side of the highway with her back legs zip-tied together. Unable to move, Samantha was on her back, crying sadly, begging for help.

“I was leaving a (Verizon Wireless) cell site and driving down Highway 84 heading west…when I saw a head pop up on the side of the median,” Goedecke said. “… At first I thought someone might have hit her, and I walked up to her and she started wagging her tail.  I was in shock when I saw her. I was moved by it, and I was sad about it — sadder than I normally get over anything.”

However, even in that painful and terrified state, Samantha was not aggressive.  But removing the zip tie turned out to be more difficult than he first anticipated because when he tried to touch her back legs she started screaming.  By this time another good Samaritan had stopped and together they were able to hold her down and remove the zip tie.  Cindy Renz had received a phone call from a friend who had also seen the dogs plight and didn’t know what to do, so Renz quickly headed over and assisted Goedecke with the rescue.

Quickly they wrapped up Sam in a blanket and took her to Sawmill Animal Hospital.  “The folks that stopped and got her saved her because otherwise she would have gone all night like that and lost one or both of those legs,” veterinarian Dr. Ned Hinton said. “She had some swelling in her back legs, but all in all she was in pretty good shape.”  It appeared that this had been done intentionally as it is hard to imagine how a dog could have tied itself up in that manner.

Samantha needed stitches to close the wound but was otherwise okay and is now living happily with her rescuer, Patrick Goedecke.  “She’s super loving and super sweet. I take her to work with me every day, and I’m going to keep her with me no matter what.”