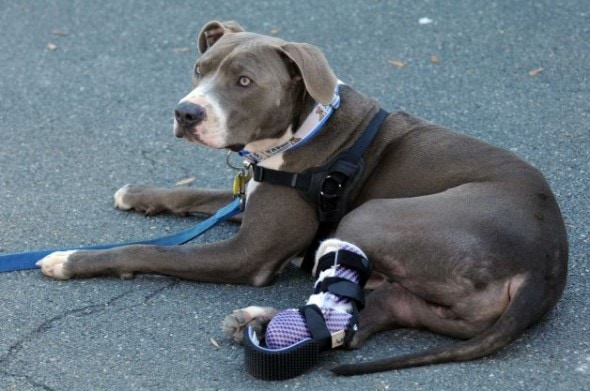 It has been over a year since Hudson and his sister Pearl were rescued from railroad tracks in Albany, New York. Hudson is continuing to make progress and on Saturday he was outfitted in a new prosthetic paw to replace the one he had outgrown.

In September 2012 Hudson was found on the railroad tracks with two other puppies, all suffering from severe injuries to their left rear paws. Unfortunately one of the puppies wouldn’t survive, but Hudson and his sister Pearl did survive and caught the hearts of animal lovers all over.

Hudson’s injury to his paw was so severe that he required a prosthetic. He received his first prosthetic in November of last year, but as he has grown that prosthetic no longer fit him. Now he has been fitted with a new prosthetic paw that will help him continue to improve.

“He has his daily struggled of getting in and out of cars, up on the couch or in bed so we have to lift him quite a bit,” said Hudson’s owner Richard Nash.

Hudson continues to make improvements with the help of his prosthetic though, and actions that some dog owners would not encourage are seen as victories for Nash.

“Not many parents would be happy their dog jumped on the table, but he used his hind legs to get his front paws up on the table and that was a really amazing day,” said Nash. “We were crying because we were so happy to see him do that.”