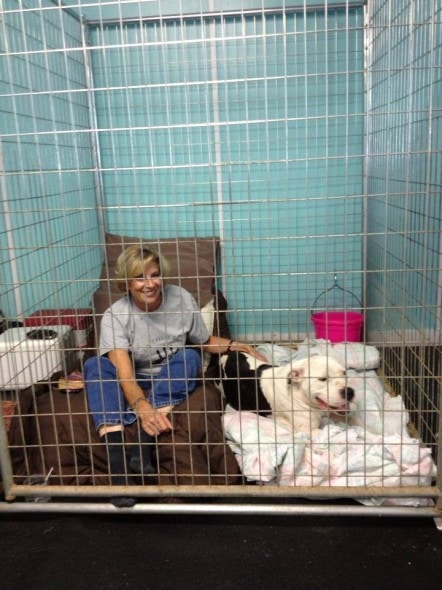 A volunteer at a shelter in Louisville, Kentucky is going above the usual volunteer duties to help get a shelter dog adopted. She spent her entire weekend with the pit bull mix dog named Boss Man, living with him in his kennel.

For a year and a half Boss Man has lived his life in a shelter. Paula Sparrow wants to change that. She hopes her efforts will not only help find Boss Man the home he deserves but also help other dogs at Tyson’s Chance Animal Foundation.

“There are thousands of dogs just like Boss Man who are needing a home, but the shelters are full. They’re clamming for attention. He’s also a pit mix, so he gets passed by a lot,” says Sparrow.

Sparrow started her time in the kennel with Boss Man on Friday and stayed with him until 5 p.m. on Sunday. She spent the weekend doing everything Boss Man did.

For 48 hours the two were side by side. She hopes the attention the shelter and Boss Man has received from her stay in the kennel will help him find the home he deserves.

“There’s a family out there and I just know it,” said Sparrow. “I just got to reach them. I just got to find them.”

Boss Man is great with children, but would be best in a home with older children that doesn’t have small dogs and cats. For more information on him and other great dogs visit the Tyson’s Chance website.