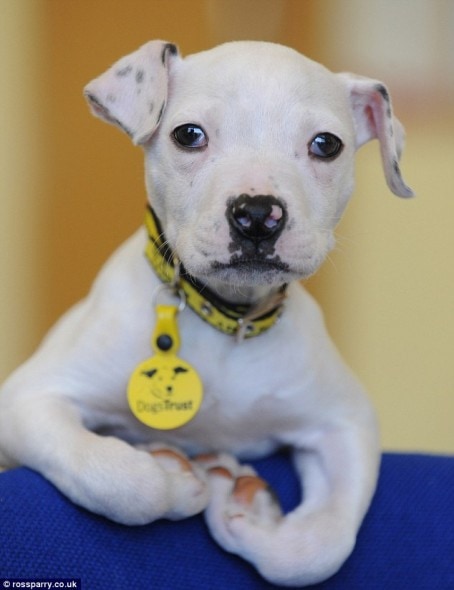 In just a few weeks a Staffordshire Bull Terrier cross has made a remarkable recovery. The puppy was given the name Wonky because her malformed front legs caused her to walk awkwardly on bent joints. Now the name isn’t as fitting as she walks and runs around like a normal puppy.

Wonky was found wandering the streets as a stray and on February 9th she was brought the Dog Trust in Leeds. She had a condition known as knuckling. Her tendons were contracted and preventing her wrist joints from extending fully. This meant her front feet bent inwards because of her shortened tendons.

Veterinarians believe this was caused because she was taken from her mother too early. “She had not had the right nutrition and a poor diet meant her front legs were underdeveloped,” said Amanda Sands, manager of Dog Trust. “It’s such a sad case because this was completely preventable if only she’ had the right love and care.”

There was a lot of concern that her condition and awkward legs would make her hard to adopt, but on the contrary 600 people have applied to give the puppy a new home. Through physiotherapy she has made great improvements in her legs, but further physiotherapy will be necessary. Her improvements have been so significant that the name of Wonky no longer seems appropriate and the staff has renamed the beautiful puppy Juliette.