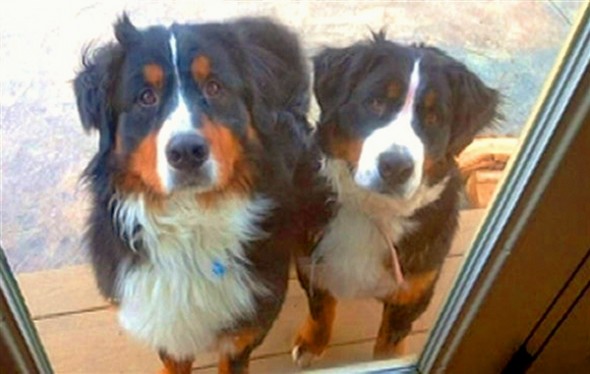 Earlier this month we brought you the heart-rending story of Argus and Fiona, two dogs who were shot by a neighbor after they escaped from their yard in Chester Springs, Pennsylvania.  Now Senator Andrew E. Dinniman is hoping to prevent such tragedies in the future by amending state laws.

Dinniman recently announced plans to propose two bills that would discourage the shooting of harmless, runaway dogs.  The amendment would clarify the section in Pennsylvania Dog Law explaining when an individual is permitted to shoot a dog on their property.  Current law states that “Any person may kill any dog which he sees in the act of pursuing or wounding or killing any domestic animal.”  The recommended change would ban a person from shooting a dog that is “pursuing” another animal (after all, dogs will be dogs).  Killings would only be permissible if the animal is exhibiting an “apparent intent to harm” a person, pet or livestock.

The Bock family’s Bernese Mountain Dogs escaped from their yard when a tree branch fell and collapsed a portion of the fence.  They wandered onto Gabriel Pilotti’s property, and were shot and killed by the man when he saw the pair near his sheep.  He said they were chasing the sheep, but there was no acknowledgment that they were posing a threat.  Pilotti told police he did not attempt to yell at or chase the dogs away, and that they were not pursuing his sheep when he shot them.

The voicemail is apparently in reference to an earlier incident wherein Pilotti killed two loose pit bulls in the neighborhood that attacked and killed several sheep and an alpaca.  Boden says Pilotti is a good neighbor and conscientious animal owner, but he does not condone Pilotti’s most recent actions.

“There were other alternatives than shooting them… I think he did an injustice by shooting them,” Boden said.

The Bocks started a Facebook page, Justice for Argus & Fiona, to raise awareness.  Between that and overwhelming community support, state legislators were persuaded to take action to amend their ambiguous law.

“When you read it, it says (that) anyone can kill an animal if they see that they are pursuing, wounding or killing,” said Phyllis Noonan of North Coventry.  “The word ‘pursuing,’ in dog language, is a dog that breaks loose.  They’re pursuing whatever — a balloon, another dog, a cat. This is a horribly sad situation.”

Though no charges were initially filed, Pilotti has since been charged with cruelty to animals and recklessly endangering another person.  This likely comes because Pilotti admitted that Argus and Fiona were not pursuing his sheep when he shot them, thus eliminating the legality of his actions.

“Nothing can bring back those beautiful and loving family pets, but their deaths could not stand in vain,” said Chester Springs resident Kim Niggeman.  “We are asking our lawmakers to please revise the present law to state that if a domesticated animal with a collar enters a property, one does not have the right to shoot first and ask questions later.  This community is changing.  The current law is outdated and needs to be more specific.  We shouldn’t live in fear if our beloved pets get away from us.”

Pet owners aren’t the only ones living in fear at this time.  Since the incident, Pilotti has been receiving a number of threats.

“I know Mr. Pilotti very well,” said neighbor William Malenke.  “Gabe raises his lambs in his house.  He bottle-feeds them.  They are his babies.  He does that every year.  And my kids, we go down to the barn and we see those little lambs; they are his prize possessions.  He has had dogs in the past, he has no dogs at this time.  Do I agree with what happened?  Not in the least.  It was a tough thing.  Do I think Gabe is a bad man and deserves the death threats that have occurred to him?  No.  He’s had death threats to both himself individually and to all his sheep.  I think it’s a tragedy for the whole neighborhood.”

Dinniman said that the new bill has been in the works since before Fiona and Argus were gunned down.  The bill would allow pet owners to seek civil damages up to $12,000 if their pet was killed intentionally or through negligence.

“My bill, even if passed, is not retroactive and will have no direct effect on the parties in West Vincent one way or the other.  But this awful shooting illustrates what can happen and the need for our justice system to better recognize the unique role pets fill in our families,” Dinniman said.  “In fact, I don’t consider the civil damage award to be my bill’s main message.  The main message is for Pennsylvania’s courts to recognize the companionship and affection provided by pets and that both have value.”