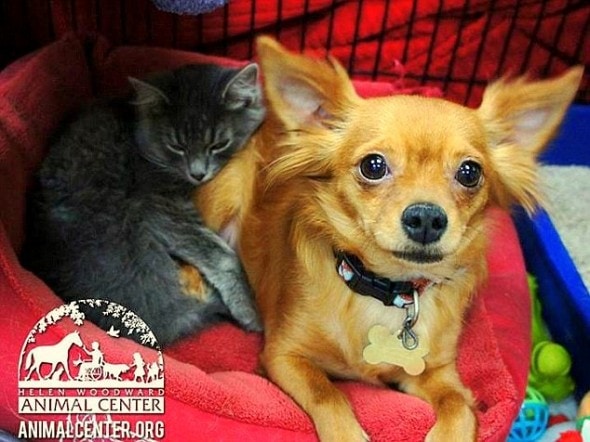 A Chihuahua named Beignet and a kitten named Gumbo were saved after being abandoned when their Barstow, California owners moved.  Neighbors thought they heard a mother dog tending to a new puppy in the 20-degree weather, but what they found was a dog nursing a kitten, who would have died had It not been for its new mom.

After the pair were discovered on the freezing January day, they were turned in to the Barstow Humane Society, and then were taken to the Helen Woodward Animal Center.

“This incredible little family really demonstrates the pure hearts of the orphan animals we meet each day,” said Helen Woodward Animal Center Inventory Manager LaBeth Thompson.   “They love each other.  That’s all there is to it.  It’s not complicated.  They needed each other and they were there for each other.” 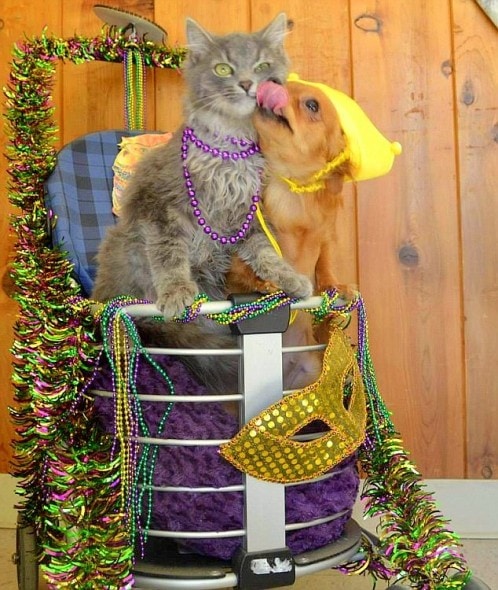 As the story of Gumbo and Beignet spread, hundreds of people clamored to adopt the bonded pair, who would only be adopted out as a set.  To find the best home, the Center asked potential families for a 300-word essay in addition to their application.  After scouring dozens of essays, the perfect family has been found.

“An incredibly doting husband and wife team of empty-nesters from Chula Vista, California, are excited to start a new family with Beignet and Gumbo,” the Center’s webpage stated.  “Once medical follow-ups and final details are wrapped up, Beignet and Gumbo will have a forever home of their very own.  Congratulations to them and thank you all for your loving encouragement and support of these two extraordinary orphan pets!”

2 thoughts on “Abandoned Chihuahua Saves Kitten from Freezing to Death”