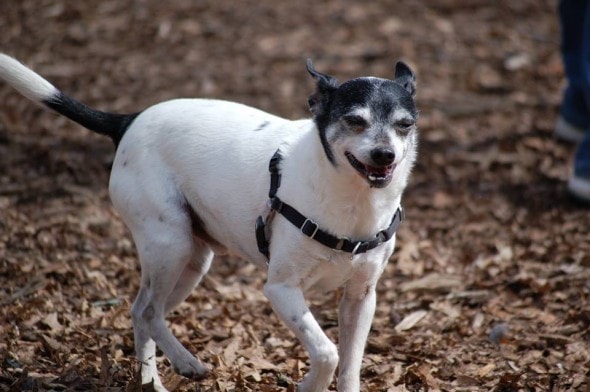 In July, 2013, Wilbur was found abandoned on a driveway, cooped up in a small kennel with several cats. He and the cats were in bad shape but had at least been dropped off in a public place where they would be found.

While sad, it could have been much worse if they had been dropped off in a secluded area with little chance of being found and where they would have likely starved to death, scared and alone inside the kennel.

Luckily, there was room for Wilbur and for the cats at the Helen O. Krause Animal Foundation Inc. (HOKAFI).  Wilbur was set up in a nice soft bed with fluffy blankets in one of the kennels and given food and water. Most dogs are a little unsure when first arriving at the shelter. However, it was obvious from the start that Wilbur’s fear was much greater than most dogs.

In addition, Wilbur’s nails were grown out far too long making it painful for him to walk. His teeth were in terrible shape too. Those that were not rotten were covered with tarter. At his initial veterinarian visit, it was determined that he has a heart murmur.  His age was also estimated to be at least 10, classifying him as a senior.

At just 10 pounds, Wilbur huddled in the very far back corner of his kennel and shook from fear day and night, watching any volunteer  who walked by and hoping to not be noticed. He was extremely afraid of collars, harnesses or leashes and had probably never been walked before.  After just a few nights, it was obvious that Wilbur would benefit from a foster home, even though HOKAFI has kennels.

The foundation normally houses all dogs at the kennel unless they are undergoing extensive surgery or require special care, something it was decided Wilbur needed. Luckily, a foster home was found and approved quickly, enabling Wilbur to recover from his dental surgery (removal of all but 7 of his teeth) in a home environment.

Foster care seemed to do a world of good for Wilbur. He began to gain weight, became less frightened, learned to enjoy walks, and began to love to sit on laps and to play with other dogs. By October, his personality had changed so much-he had become a happy, feisty little guy-and he fit so well in his foster family, they could no longer picture their lives without him and so they decided to adopt him! Most senior and special needs dogs are not so lucky.

Wilbur now loves playing with the three other dogs in his forever home. He also loves going to the dog park and meeting new friends-both canine and human. He has bloomed into a social butterfly and does not take a moment of his new life for granted. He has even helped some of the more shy dogs at the dog park become comfortable and learn to socialize.

Two of the other dogs in his family are 8 and one is 14, but Wilbur sure acts as if he is younger than all of them! After a day of running in the yard and a nice walk around the neighborhood saying “hi” to the neighborhood dogs, he cuddles up under the covers in bed and snuggles next to his person, dreaming happy, peaceful dreams. Shelter dogs seem to understand how wonderful it is to have a forever home and family and have no problems showing how grateful they are. Wilbur’s new mom says,

“Wilbur thinks he’s lucky to have us, but we are the lucky ones to have him!”

The Helen O. Krause Animal Foundation, Inc (HOKAFI) is a non-profit, no-kill animal shelter for dogs and cats located in central Pennsylvania. The shelter is run primarily by a dedicated corps of volunteers and government by a volunteer Board of Directors. The Foundation depends entirely on the private sector for funding through donations, membership dues, grants and fundraising activities.