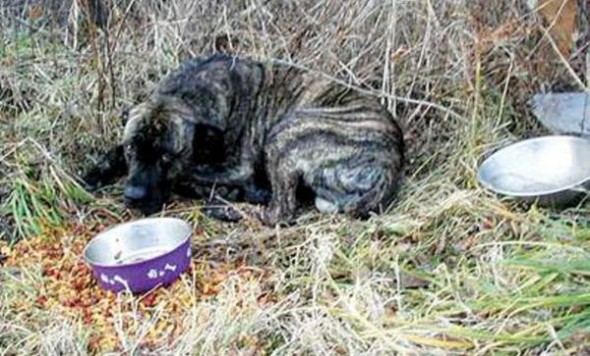 An animal control officer is on the hunt to find the person responsible for abandoning a mastiff in a wooded area of Delaware County NY.  The dog was tied up with a bag of kibble and 2 dishes nearby, and was found at the side of the road by Julia VanSteenburg who took the giant brindle colored Mastiff to the Humane Society and called police.

When VanSteenburg first approached the dog she held a catch pole, but when he growled at her she put it away and he warmed to her allowing her to leash him.  “He really didn’t want to leave that spot,” VanSteenburg said. “He was determined that his owner was coming back for him to that spot. This dog pulled at my heartstrings.”

Karen Crawford, the manager of the Delaware Valley Humane Society in Sidney said, “The dog is definitely a gentle giant.  He is having some anxiety problems probably due to the fact that he was abandoned by the side of the road by his owner.  But he is friendly and loveable.  Because the animal officer brought the dog in herself we must hold it for ten days while the hunt is on for the dog’s owner and to find out why this dog was left by the side of a remote road.”
One of the dishes had a price tag from a Marshall’s store in Kingston and it was discovered that the bowl was purchased at a store 81 miles away from where the dog was found.  Since the dog had no tags the next step will be to contact veterinarians and shelters in the Kingston area to see if anyone recognizes the abandoned pup.  “If nothing else, these people need to be read the riot act,” she said. “I hate seeing stuff like that. It’s like he’s a piece of garbage — throw him away.”  Anyone with information on the case can reach VanSteenburg at (607) 369-3498.

15 thoughts on “Abandoned mastiff was left at the side of a road, waiting for his owner to come back”