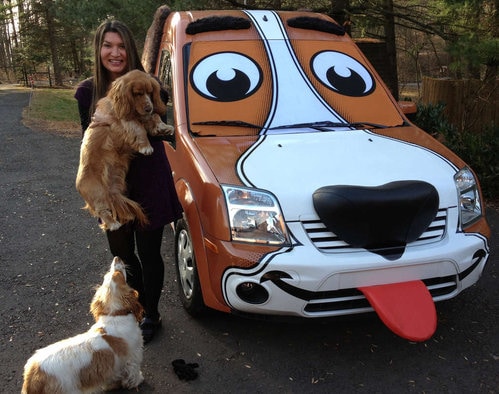 Kudos was a basset hound-cocker spaniel mix, with a radiant personality.  So much so that he inspired his owners, Evy and Ted Inoue to start a business; a start-up that would let people share online thanks to everyone from good Samaritans to great contractors.

They even went as far as to use their van as an advertising tool by painting it to look like their dog.  “By giving it the look and personality of our dog, we hoped it would spread happiness wherever it went,” said Evy, a children’s book author who writes under the pen name Kimiko Kajikawa. “We’d go to events and honor all sorts of heroes. We’d be giving out kudos.”

But OurKudos.com turned out to be a much bigger project then either Evy or Ted anticipated.  Even with Ted’s expertise, and he is very good with computers, a couple of events conspired to stand in their way.  The collapse of the economy made things very challenging, but more so was the death of Kudos the dog, the namesake and inspiration for the company.  Just over a year ago Kudos passed away after being was diagnosed with Lyme’s disease, leaving the Inoue’s heartbroken.

The van, which Evy had nicknamed Waggin Wheels, sat in the garage for many months while they decided what to do next.  Finally Evy discovered a tiny nonprofit called Petswithdisabilities.org and contacted Joyce Darrell and Mike Dickerson who have run it for the past ten years.  They foster and rescue disabled dogs from their home in Prince Frederick, Md and have been shuttling dogs and their wheelchairs around in a 1996 Saturn wagon.

Evy invited Joyce and Mike to come and see the van, so Mike made the trip with Annie, a wheelchair dog, and Megan, who is blind.  In the true spirit of Kudo’s, the Inoue’s decided to donate the van to Petswithdisabilities.org so that other dogs might benefit from what he inspired.  “We’re being touched by angels,” Joyce said. “They could have sold that van and got their money back. They deserve kudos, too.”