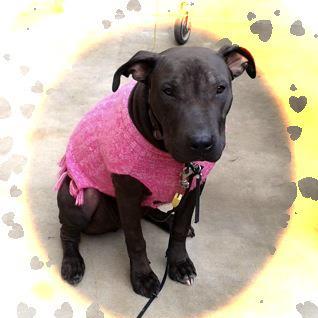 A dog that was found abandoned behind a Walmart on Christmas eve is getting a chance at a fresh start for the new year.  The dog, who has now been named Sadie, was taken in by two compassionate Walmart employees after she was discovered tangled up in a rope and unable to stand.  “I just felt really sorry for her. She was pathetic-looking and really friendly,” said Richard Leighty, 70, who works in the store’s garden department.

The 40 pound mix breed was initially tied up with another smaller dog that ran away when they got them untangled.  When Leighty found out that Yuba County Animal Control was closed for the holiday he decided to take her home for Christmas.  He and another employee, Jamie Perkins, are sharing the foster care for Sadie, who is estimated to be just under a year old.

Though people were initially afraid to approach the tangle of dogs, Sadie is very sweet and friendly. “The first time I approached her, I got the wiggle butt,” Perkins said.  He did some temperament tests with her and did beautifully. Sadie has since been checked out by a vet and had vaccinations and been spayed thanks to the help of Chako, a pit bull rescue group in Sacramento.

Sadie had a bald spot on her back and some minor wounds when she was found, but is healing nicely and is extremely happy to be spending time at Perkins home with her family and her large persian cat.  Leighty wasn’t sure how Sadie would react to his home on a five acre property shared with other animals including chickens and horses, but it went smoothly.  “I didn’t know how my dogs would react. They’re usually very aggressive toward other dogs. But they took to her immediately.”  “She attempted to chase a chicken at first, but I said, ‘no,’ and she immediately stopped and followed me,” Leighty said.

Sadie is up for adoption and while they wait for the perfect forever home for her they are trying not to get too attached to the sweet girl.  Anyone interested in adopting her should contact Nancy Pasternack at [email protected] or 749-4781. Find her on Facebook at /ADnpasternack or on Twitter at @ADnpasternack.