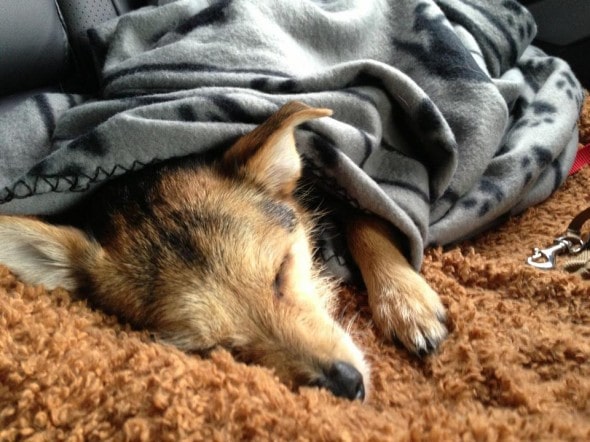 Rico was sitting in his crate inside his owner’s parked car Saturday night when a drunk driver hit the car. The crash caused Rico’s crate to open and he fled the accident scene. By Sunday Rico’s picture was all over Facebook as hundreds shared Rico’s story hoping to help find him.

Nicole Weir had gone into a local pub to visit some friends for an hour. She left her six-year-old Yorkshire Terrier mix Rico safe inside his crate in her car. When she came back to her car she found it demolished and Rico missing. According to police in Portland, Oregon Weir’s car was hit by a speeding Chevy Malibu. The accident had cracked Rico’s crate open and he had fled the scene.

Sunday Weir posted fliers all over town and started a Facebook group to spread the word about her missing dog. Soon dozens of people were helping search for Rico and hundreds had seen his picture on fliers and Facebook. Local news stations picked up the story and Rico’s story was well known throughout Portland. Throughout the day several tips on Rico’s whereabouts came in, but he hadn’t been caught yet. “The good news is the pits that we’ve gotten, they say he’s like running really fast and that they couldn’t catch him,” said Weir. “Hopefully that means he wasn’t badly injured in the accident.”

Rico was thankfully also wearing a collar with identification and was microchipped. Early Monday morning Connie Petersen found and safely captured Rico. “He was standing in my driveway when I let the house and eventually (my daughter Michele and I) enticed him to come to us after following him across our busy street,” said Petersen. “It wasn’t until we called the number on his ID tag that I realized who he was. I’d seen it on the 11 o’clock news last night and was so happy to find his owner.”

Weir is relieved to have Rico home safe and sound. When she was finally reunited with Rico she burst into tears. “I wanted to thank everyone so much for your support and prayers and good thoughts and tips,” Weir posted on Facebook. “I am absolutely overwhelmed by the response and offers to help. There are no words to fully express and I hope that once we are able to rest. I can better articulate my thanks!”