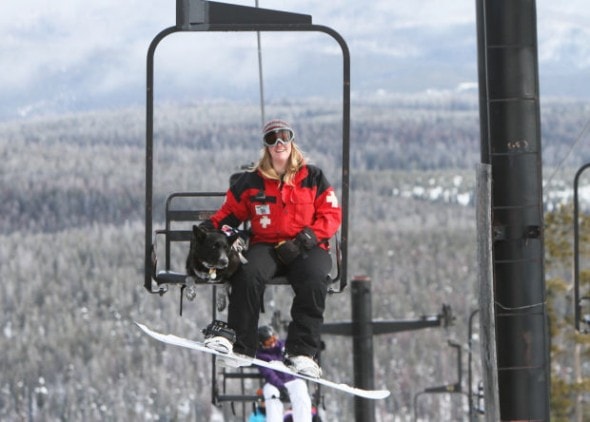 On the slopes of Lost Trail Powder Mountain along the Montana-Idaho border a happy border collie/terrier mix named River can be seen happily running around. He is the first and only certified Search and Rescue dog employed in that popular ski area.

River and his owner Sarah Cathcart completed the Wasatch Backcountry International Rescue Dog School in Utah last year. “It took six days, and they tested our dogs in really extreme circumstances,” said Cathcart. “For the final test, they load you onto a helicopter while it is still running and drop you off in the slide country. They have an avalanche set up, and your dog has to rescue a person ‘buried’ in a snow cave under real-life conditions. And then you are required to hike back out.”

River, who is now five-years-old, has been training since he was only a year old. “He develops what we call victim loyalty,” said Cathcart. “He has learned that finding people buried in the snow means he gets to play.”  While for River rescuing people is about fun, the work he and other search and rescue dogs do is critical. “There is what we call a golden 15 minutes in order to find someone lost in an avalanche,” Cathcart explained. “Within that time, you have a 94 percent chance of living, as long as you didn’t have an injury from trauma.”

Cathcart and River started patrolling the slopes of Lost Trail Mountain in January.  River can be seen bounding down the slopes and riding the chairlift. Although the sight of a dog on the chairlift surprises some people, he’s now recognized by the mountain regulars. His presence could be the key to saving one of their lives in the event of an avalanche.