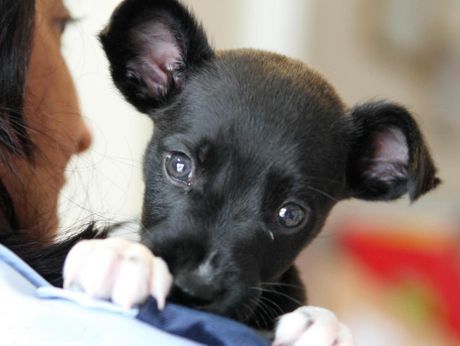 In March of 2011 Brutus was an abandoned four-week-old puppy. He was a special puppy and people quickly noticed his intelligence and drive. Now after excelling at training and testing Brutus is military working dog helping detect bombs in war-torn countries.

At only four-weeks Brutus was rescued by a Whangarei SPCA worker when he was found abandoned at the Oakleigh Service Station in New Zealand. Helena Sweeting, an animal welfare inspector at the Whangarei SPCA, noticed something special about Brutus. He was clearly very intelligent and when it came to playing ball he was obsessed.

Sweeting contacted New Zealand Detector Dogs and Brutus was accepted for intensive training to see if could succeed as a bomb sniffing dog. Brutus easily passed all the tests given to him and went to work for a foreign army. “[The foreign army] put him through an intensive 26-week training course and he passed all the tests and is now operational for the army and deployed overseas,” said Brutus’ trainer Guus Knopers.

Knopers can’t say which army Brutus is now working for but said he knew that Brutus was going to be successful almost immediately. New Zealand Detector Dogs has a policy of using only rescue dogs and out of all the dogs Knopers has worked with over his 30 years as a dog trainer he says Brutus is in the top 5 percent.

Sweeting does worry about Brutus’ safety in a dangerous job. Knopers says that although Brutus is involved in dangerous situations he is well trained and the army he works with values him. Sweeting is more than anything proud of the little abandoned puppy that is now helping to save lives, “It’s not bad for a little rescue dog from Whangarei SPCA, is it?”