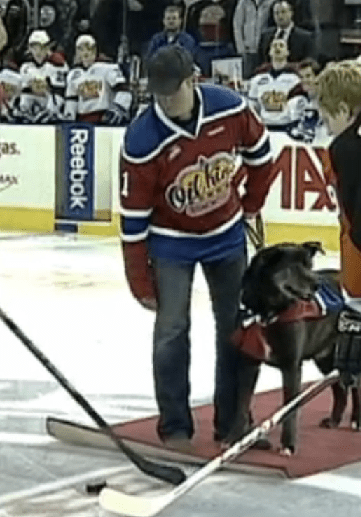 Heroes Adam Shaw and his dog Rocky were being honored by a local hockey team Friday night when they were given an emotional surprise. As they walked off the ice they were for the first time reunited with the two little girls they pulled from a freezing river last Sunday.

Shaw and his dog Rocky became heroes last week when they rescued two little girls from the Saskatchewan River in Edmonton, Ontario. Samara and Krymzen fell into the icy river last Sunday afternoon when Shaw and Rocky came to their aid. Shaw pulled Krymzen to safety and then Rocky saved both Shaw after he fell in the ice and Samara.

The Edmonton Oil Kings honored the duo by having the drop the ceremonial puck at their hockey game Friday night. When they left the ice they were surprised by the two sisters, it was the first time the four had seen each other since the daring rescue. “Last time I saw them it was so scary and, you know, they were cold and scared. So it’s just good to see them healthy and walking around,” said Shaw.

It didn’t take long for the tears to flow as the two little girls expressed their gratitude for their heroes. “I saw some tears there so I was trying to be tough and hold some back, but it’s great,” said Shaw. “That was awesome.” The girls are extremely thankful for Shaw and Rocky’s efforts and brought the two gifts. “It was brave, incredible and I really love him now,” said Samara.