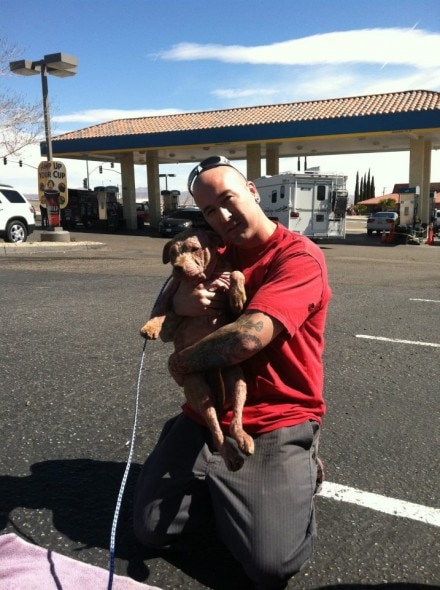 When Nadine Swart took a picture of a scared shelter dog that was suffering from Demodex mange and scheduled to be put down she had no idea that it would actually save the dog’s life. After posting the picture on Facebook it received over 27,000 views, one of which would save the little dog.

In early March Nadine Swart went to Wilcox Animal Shelter in Arizona for the first time. She had recently started a Facebook page called “A Voice For Arizona Shelter Dogs” and was there to take pictures of the dogs. When she walked into the first kennel she was shocked by what she saw. “The dog appeared so small as she sat upright in the corner of this dark kennel,” said Swart. “I tried to get her attention but she barely acknowledged me with my camera. It was one of the saddest things I had ever seen.”

The dog was suffering from Demodex mange and she had hardly any fur at all. Her skin was severely irritated and there were several areas that had become infected. With the help of a shelter worker Swart was able to snap a picture of the cowering dog. The worker informed Swart that the shelter would likely euthanize the dog because her mange had become so bad.

Swart went home and immediately posted the dog’s picture to the “A Voice For Arizona Shelter Dogs” Facebook page. The page had only been active for six days and she wasn’t sure much would come of posting the dog’s picture. Swart watched as the picture received over 27,000 views and hundreds of shares.

Joshua Cummings was one of those views. “Being on disability and not working I was searching Facebook posts and saw this sad faced pit mix with mange,” Cummings posted on Facebook. “Seeing her skin all cracked and bloody made me sad. In talking with my wife Sarah Cummings I showed her the picture and started crying. Mad that anyone could let his happen, when it’s a cheap simple fix when caught early enough.” Cummings other dog had suffered from the same condition to a much lesser degree so he knew exactly how treatable it was and the care it would require.

Cummings messaged back and forth with Swart to see how he could help. He finally decided to drop everything and drove from his home in California to save the dog he now calls Peanut.

For a month now Cummings has been helping Peanut recover from her condition and chronicling all on Facebook. The amazing love and care Cummings is providing Peanut is evident from the page. She is fitting in wonderfully with her new family, including their other dogs Jax and Mr. Bones.

Anyone wishing to make a donation to help with Peanuts vet care and medical bills can do so via PayPal. For more information visit Peanut’s Recovery Facebook Page.