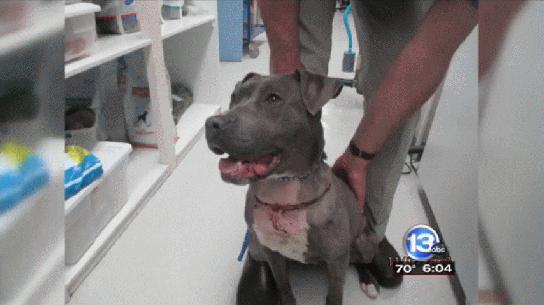 New York State Troopers in Williamson managed to grab a dog that had been bolting in and out of traffic on Route 104, near the Spencer Speedway on Tuesday around 8:30pm.  When the dog was found, she had severe, deep wounds on her neck, and police have launched an investigation in to how she ended up so badly injured, and on the loose in that area.

Officials with the Humane Society are saying the dog’s neck was badly injured and there were sores under her legs.  This is believed to be due to a harness being put on her too tightly, and constantly tightened and never taken off.  It is believed to get injuries, she would have had to be wearing that harness for very, very long time.

“My assumption is that that harness had to be cut off from her, it didn’t just come off because it had grown into her neck so far,” Mark Plyter of the Humane Society of Wayne County said.  “Probably some of the deepest wounds I’ve ever seen on a dog, it took months for this to happen and you had to have known, somebody had to know.”

She is now being cared for by a Vet in Wayne County.  Regardless of the injuries she’s sustained, the prognosis is a positive one.

“She seems very sweet, she’s feeling a lot better, she’s got some medicine in her and her wounds are cleaned up and she has some food and water,” Plyter Said.

Taking a look at her wounds, even professionals think her throat was actually cut with a knife.

Chelsie Anjo of Wolcott, New York is helping police with the investigation and said, “(It’s)Pretty rotten, I thought someone maybe even slit the dog’s neck before you told me what actually happened, it’s pretty cruel.  They need to come forward because it’s not okay to treat animals like that regardless if you love a dog or you don’t it’s still not okay.”

Wayne County’s Humane Society is paying for her medical care and is offering the public a $500 reward to anyone providing information that leads to an arrest and conviction.  After hearing that, The Times of Wayne County also offered an additional $500 reward for the same information.

The Williamson Barracks of the New York State Police is leading the investigation, and can be contacted at 315-589-8288.  You can also call 911 or CrimeStoppers at 585-423-9300.  Calling CrimeStoppers also qualifies someone for an additional cash reward if the info provided results in an arrest and conviction, and all calls remain anonymous.