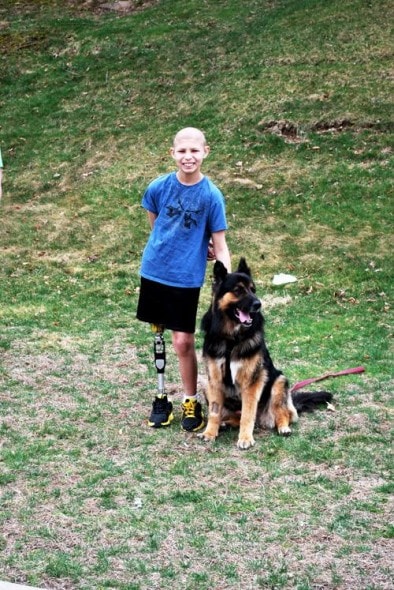 Being deaf has many challenges.  It can be frustrating to feel isolated from the world around you.  One man says, “I hate having to rely on others to tell me what’s going on, I hate looking like the prize idiot when someone talks to me.”  But having someone around that can understand what you’re going through can make a world of difference.  Such is true for a Connecticut boy and his dog.

Last month, an eight-year-old dog called Barney was rescued from an Oxford, CT property along with three other dogs and some farm animals.  When he was examined by a vet, it was determined that Barney was deaf.  Knowing how difficult it is to place blind and deaf dogs, animal control staff hoped a home could be found for him.

As luck would have it, a woman named Kelli Tucker was scanning through petfinder.com when she came across Barney’s listing.  She had a good feeling about this dog.  Like Barney, her 10-year-old son Marik is deaf.

When the two met, there was instant magnetism.

“When we saw the look on his face, we just knew he had to have this dog,” Kelli said.  “They bonded from the start.”

Barney was adopted and renamed Zero.

“He (Zero) was a little shy at the beginning, but now he’s fitting right in with our family,” said Kelli. “We’re so glad we have him.”

Marik, who attends the American School for the Deaf, enjoys football, soccer, drums and guitar.  Having a canine friend who is also hearing impaired is a boon at this time of his life. 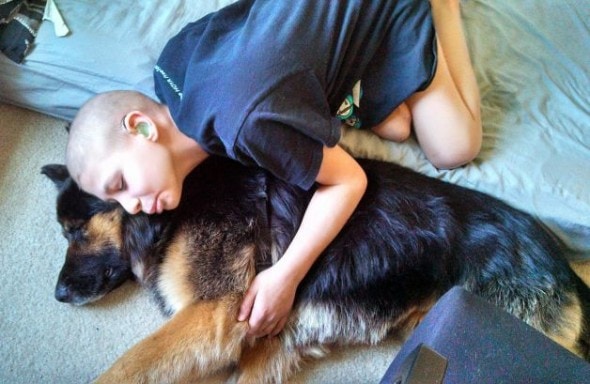 Marik needs all the support he can get; he is currently undergoing treatment for osteosarcoma (bone cancer) at Yale-New Haven Hospital.  A tumor was found in his right leg last summer, and it was amputated from the knee down.

“This is going to affect him his whole life,” his mom said.  “No one should have to go through this, especially not a child.”

Kelli said the reason they wanted to get Zero was to help encourage Marik to move around a bit more and to allow him to enjoy his hobbies.  In addition, having a pet might give him something aside from his illness to focus on.  The German shepherd loves playing catch and fetch, so he has no problem keeping Marik up and about, and the pair has bonded wonderfully.  Some days Marik doesn’t feel much like doing anything.

Even more importantly, Zero has become a terrific buddy.

“He is always sweet and gives me kisses on my face,” Marik said. “He’s just my good friend.”