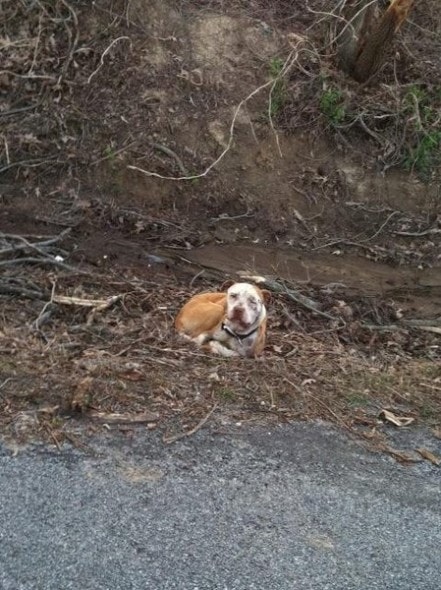 Earlier in the week, a photo of a badly beaten and forlorn dog curled up on the side of a Tennessee road made its rounds on Facebook pages in the area.  After seeing the dog who urgently needed help, some good Samaritans set out to find him.

The anonymous individuals were successful in their endeavor.  The dog, now known as Koa, is recuperating from his injuries at the Columbia Hospital for Animals, thanks to the organization Tennessee Death Row Dogs.

Koa has been living a life of anguish.  He is heartworm positive, emaciated and covered in gashes and bite marks.  He also has three bullet wounds and is fighting a systemic infection.  One of the bullets went through his jaw, making it terribly painful to eat.

“We suspect that Koa was possibly stolen, forced to fight for his life and wasn’t a fighter so he was dumped on the roadside and shot. Whoever did this to him probably thought he was dead and just drove away, leaving him there like a piece of garbage,” the rescue organization stated.

In spite of his wretched existence, Koa perseveres.  A dog understanding and truly appreciative of being saved and cared for, he greets everyone he encounters with a wagging tail. 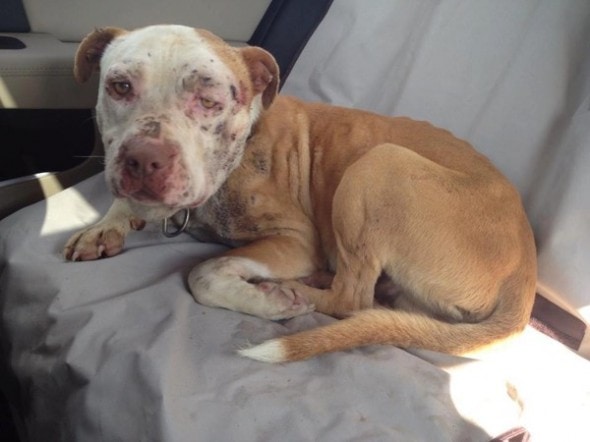 “Koa is very kind, despite his pain and terrible infection.  He tries to love on you even though he is miserable.  It’s heartbreaking to think someone exploited this kindness and hurt him this way,” his rescuers said.

Once left to die alone and in pain, Koa is now safe and loved by his caretakers, all thanks to the determined and kind-hearted folks who knew they had to find him.

Donations to help with Koa’s care can be made here:  https://fundrazr.com/campaigns/cUVab

Buy a t-shirt and help out some of Tennessee’s Death Row Dogs here:  http://hendrickboards.com/shop/critical-needs-koa?tracking=50841d3046b08