United States Marine Veteran, Billy Ventura and pit bull puppy, Molly are a match made in heaven.  Both Ventura and Molly are survivors in their own right.  Molly survived a horribly abusive home, and Ventura survived a hit-and run accident that left him paralyzed from the waist down.  Together, they make one heck of a team.

While out on leave from the Marines, Ventura was the victim of a hit-and-run accident.  He was struck while riding his motorcycle, and the person responsible is still out there.  Being paralyzed put Ventura in need of a service dog, badly.  This is where a rescue group and the local SPCA come in.

Robert Misseri heads up a  Long Island, New York non-profit, that hunts down people accused of animal abuse and mistreatment.  He also works with Guardians of Rescue.

According to Misseri, “We got a tip that a woman was abusing a dog and one of our licensed investigators went to the property and waited until she came outside.”

After informing the local SPCA and providing them with a tape of the alleged abuse, Chief Roy Gross with the Suffolk SPCA took action.

“Kicking the dog, slapping it, pulling the dog, it appears that when the dog was tired she would tug on it to go and kick it repeatedly,” said Gross.

Molly was examined and was found to have no major physical injuries.  This made any prosecution or the bringing of any charges virtually impossible.  Luckily, the woman surrendered Molly straight away.

When it came time for Ventura to seek a service dog, he was introduced to Molly.  The poor abused dog took to Ventura right away.

“She stopped, she sat by my feet and then she tried to jump and sit on my lap in the wheelchair, so from that point on I knew it was going to be great,” said Ventura.  “She really is an amazing dog.”

Molly seems to be working out just fine for Ventura.  His father said she has already been helping with the horrible nightmares he has of the accident.

“He has his nightmares, he has his dreams, but it was an immediate connection,” said Bill Ventura. 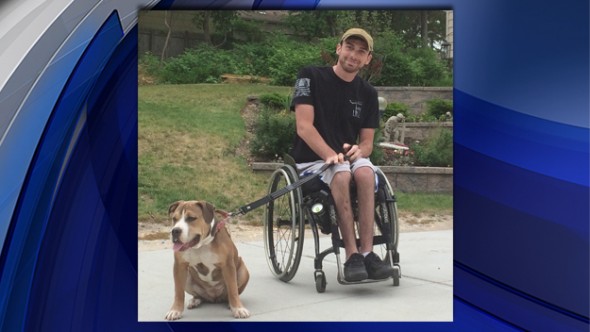