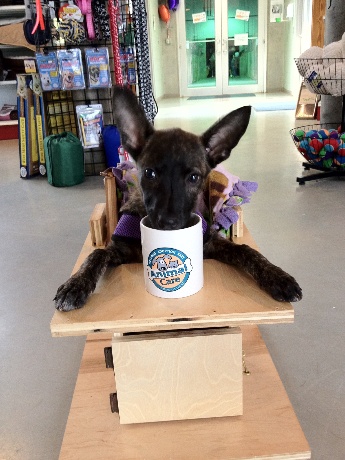 Starship, a shelter dog with a special health problem, captured the hearts of animal lovers this fall. Now Starship is hoping to help other dogs at the shelter that saved her life.

The vets and volunteers at Greenville County Animal Care didn’t shy away when Starship showed up to their shelter starving to death because she was unable to keep any food down. “Most shelters would say ‘We’re really sorry but we can’t help a puppy that’s going through this,’” said Greenville County Animal Care spokesperson Susan Bufano. “It makes us very proud of our vets because they went the extra mile, did a lot of research and x-rays and found out that she had a condition.”

Starship suffers from a disorder called megaesophagus, she requires a special made high chair to allow her to digest her food. “She has to sit upright and let gravity bring the food down,” said Starship’s foster mother Jennifer Henderson.  Animal lovers from all over fell in love with the adorable puppy eating from a high chair. One of those people who fell in love with Starship was all the way from Rhode Island and would end up adopting the special dog.

Starship’s story led to her entry in Petfinder.com’s “Luckiest Pet Contest.” The contest celebrates the luckiest adopted pets and the winner receives a $500 Petco gift card and a $5,000 donation to the adoption group of their choice. A victory for Starship in this competition would mean $5,000 being awarded to Greenville Count y Animal Care and the animals it rescues. “Money does mean the ability to help more animals,” said Bufano. The contest runs through March 18th and fans of Starship can vote at the Petfinder.com.