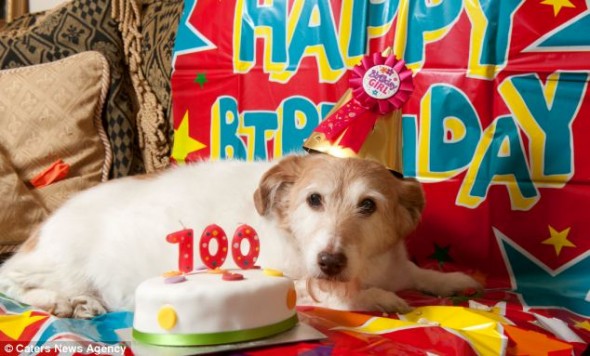 A dog that started life with the label of runt of the litter may be having the last laugh now.  Daisy, a jack russell who was adopted when she was 2 years old, just turned 22 and is believed to be the oldest living dog in the UK.  In human years, Daisy just celebrated her 100th birthday and her owner Mark Barsby-Finch hopes there will be many more.

Daisy was adopted by Barsby-Finch from Cheltenham Animal Shelter in 1993, and she was originally meant to be a gift for his niece who had always wanted a dog.  But Daisy seemed to prefer life with her rescuer and so it came to be that she stayed with Barsby-Finch permanently.  Daisy has always enjoyed the outdoors and her owner says, ‘When we first adopted her, we had access to 40 acres of farmland, and Daisy used to be off out into the fields first thing in the morning, and she’d suddenly reappear just in time for her tea.”

Barsby-Finch credits Daisy’s long life to her diet, which does not include dog food.  ‘”Daisy has never had a tin of dog food in her life, she eats exactly what we eat. Her favourite meal is roast chicken and mashed potatoes, but she’ll happily eat anything,” says Barsby-Finch.  “I wouldn’t dream of giving her scraps – I cook an extra portion of food just for her, and she eats before the rest of the family.  She’s definitely a very pampered pooch, but she deserves it. She’s given us a lot of pleasure over the years.”

Daisy’s favourite pastimes have always been long romps on the acreage, playing with ice cubes, and naps, though these days the naps are getting longer and the walks shorter.  But Daisy is a happy camper in good health, and so is her owner who threw her a little party to celebrate the milestone no one ever expected her to reach.   Here’s to many more years of happiness for Daisy and Mark Barsby-Finch.